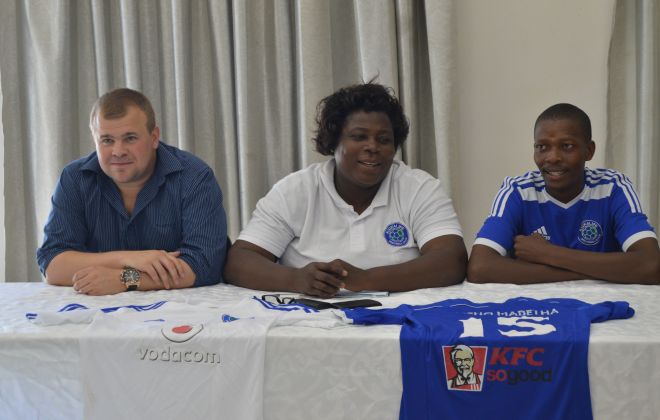 Kick4Life Assistant Coach Elizabeth Yelimala is confident that her charges will rise to the occasion and keep their good run in the Premier League going as the 2015/16 season approaches the end.

Yelimala, at the media presser, added the team are aware of the tough task in hand looking at their remaining fixture. ”We have had two weeks break and we were able to play all our players in the friendlies that we had. We tried different combinations and we are happy with what we saw, so I’m positive that we will do well in our remaining games,” she said.

The former Majantla, Mphatlalatsane as well as Lesotho’s Ladies National Team (Mehalalitoe) coach said they know it’s not going to be a walk in a park but they are prepared for the challenge.

Kick4Life is in the seventh position with only six games remaining before the end of the season, and they still need to battle it out with the likes of Bantu, Matlama and Lioli, just to name a few. They have held the holding champions Lioli to a draw, and went out to hand Bantu a surprise defeat at Mafeteng, Morapeli Lesoetsa’s thunderbolt giving the Maseru-based a good Christmas holidays time.

On Sunday Kick4Life welcome LDF in an expected to be a “thriller” encounter and either of the two teams is not expecting anything less than three points. LDF lie just below Kick4Life with only a point separating the two teams, so Saturday’s clash can be regarded as the decider of which team climbs the ladder up the log.

To defender Teboho “Masinga” Monare, they go into this game expecting nothing other than a win.

“We need the three points from LDF so that we can settle well in the league and know that our stake in the top8 is still in place. However we know it is not going to be easy because they (LDF) are a great team and they can be aggressive in the field, but like I said, we need the points so we are ready for them,” Monare said.