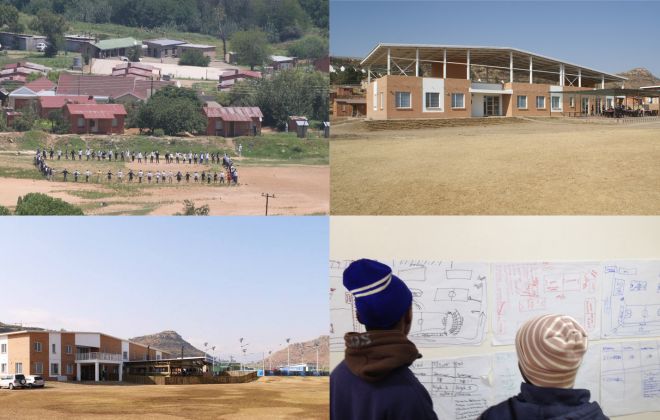 Working in stages - a phased approach to centre development

As Kick4Life F.C looks ahead to the further development of our centre in Maseru, to include a stadium, additional office space and a gymnasium, we reflect on the architectural approach so far...

Architect Pedro Clarke's involvement with K4L started back in 2007 when as a volunteer for Article-25 in Maseru, he shared an office with Pete Fleming, Kick4Life Co-founder. This was the early stages of Kick4Life's operations in Lesotho but already the idea of a centre was formed. As part of FIFA's legacy programme for the 2010 World Cup, Kick4Life was selected to host a Football for Hope Centre and this constituted Phase 1 of the development.

Kick4Life quickly secured funding to begin a second phase, and Pedro, then working of Penoyre&Prasad Architects, started the design, with the support of Jim McCloy as the local architect, Ben Behm as Quantity Surveyor and ZMCK as Engineers. As funding was only partly secured the design was done with phasing in mind, and they planned a structure that could be finished on the Ground Floor and leave the First Floor as a covered open space which K4L could use in a multitude of ways until further funding was sourced. The building was integral to Kick4Life's Social Enterprise strategy, with plans to develop a restaurant on the ground floor and a hotel on the first floor, to generate income for their charitable operations as well as providing training and employment opportunities for young people.

Such it was that between its completion in 2012 and the start of the final construction phase in 2014, while the restaurant got under way, the first floor space was used as a yoga studio, cinema, for launches, lunches and events. The final work, which included the completion of 12 bedrooms on the first floor and the expansion of the café/restaurant area at Ground Floor, was again designed by Pedro Clarke (A+Architecture) and Jim McCloy, with support the same team of consultants and contractors.

Work for Phase III is now already in planning, with A+Architecture already having started the participatory workshops with K4L staff, youngsters and other stakeholders and we hope to see it gain even more pace during 2015!

A+Architecture is a young and dynamic architecture practice that believes that architecture has the power to change people's lives and therefore should be accessible to all. It is registered in the UK as a Community Interest Company and follows a participatory model of co-design and is involved in other community led and social architecture projects in Europe, Uganda and India. www.a-architecture.org

If you'd like to fund out more about our plans for the further development of the centre please contact pete@kick4life.org