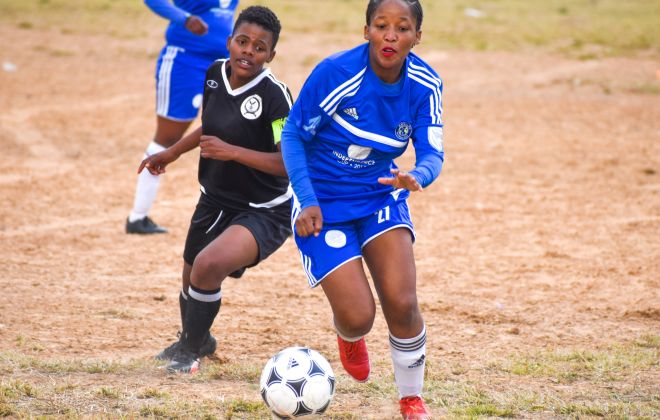 Lerato Tsoinyane scored completed her brace in the first half to see though Kick4Life Women to a  2-1 win over Limkokwing Ladies in the Women Super League on Sunday afternoon.

The win sees the Old Europa women remain a point behind log leaders LDF with a game to play before the season ends.

It was an exciting match as both sides displayed good attacking football. Coach Elizabeth Yelimala was without her skipper Lisebo Lesaoana who is still nursing an injury, but Thato Sentje stepped up to fill the space left by Lesaoana.

Tsoinyane opened the scorings in the 13th minute with a tap in to give the visiting team the lead. The combination of Morakane, Molemo and Mohoshela continued to give Limkokwing a headache as the trio bossed the front row.

Limkokwing kept on pushing and knocking at the door of Kick4Life and they were rewarded for their efforts in the 40th minute, when Nthabiseng Phate levelled matters. Tsoinyane responded quickly with a stunning header to restore Kick4    Life’s lead juts before the break.

‘Mats’ukulu Motloheloa and Mpolokeng Liphamamo were introduced in the second half to reinforce Kick4Life’s midfield and add numbers in the attacking third. Kick4Life managed to hold on to their 2-1 lead until the last whistle to see them registering their 6 win from 8 matches played.

Player of the match: Lerato Tsoinyane