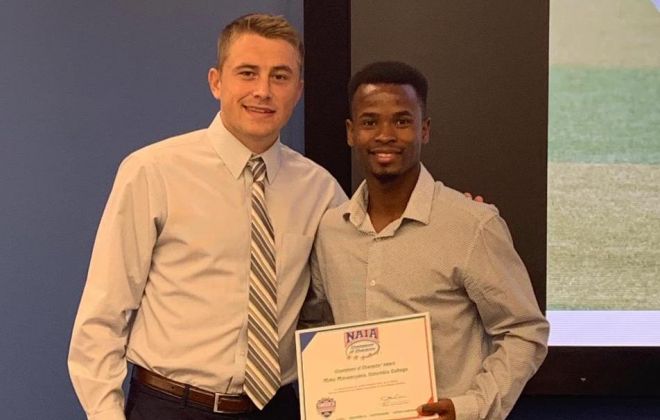 Two US based Kick4Life Academy scholars Lesia Thetsane and Mako Makoanyane were honoured with their degrees after completing their studies at Columbia College in December 2020.

The duo left Lesotho in 2016 to study at State Fair Community College where they spent 2 years of academic and football careers before joining Columbia College in 2018.

Thetsane acquired a Bachelor of Science in International business, Business Administration while Makoanyane is holding a Bachelor of Arts in Biology.

The two expressed their delight over their achievements and referenced “dedication” and “discipline” as their main tools towards their success.

Makoanyane said: “It’s a great moment for us, we are excited to have gone this far, it was not easy but we knew what we wanted to achieve. There have been a lot of challenges on the way, one being away from home, but we always knew we had our families, brothers and sisters back at home who are looking up at us,”

Thetsane also added they are still keen at continuing with their studies and football careers in the United States of America and he said when the opportunity comes, they would also be willing to offer their skills and services back at home to empower those coming after them.

Both Makoanyane and Thetsane rose from the development side of Kick4Life before being promoted to the senior side in 2015. They have represented Lesotho at the international level. Makoanyane played for the national U20, and he has also had a chance to train with the senior side. Thetsane on the other hand has transitioned well from the U20 to the senior team and he has represented Lesotho at the COSAFA senior challenge in 2018.