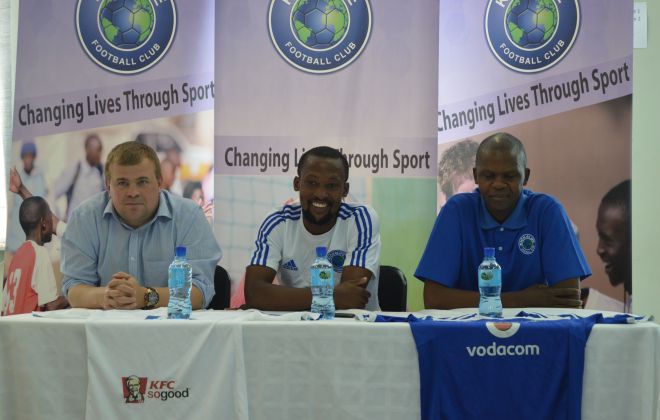 There are good attributes we can take - Notsi

After holding the champions to a stalemate up to the 80th minute, Kick4Life conceded a penalty after midfielder Thabo Masualle was sent off for a hand ball foul.

And coach Leslie Notsi labelled to match as an open encounter where both team were on to one another. “It was a very tough match but also an open one whereby both teams wanted to win and Lioli as a good formidable team, showed why they are where they are now. But at the same time I was actually satisfied with the performance of my players, there are good attributes we can take going forward as Kick4Life,” he said.

Notsi said he was happy with the goal scoring opportunities his team created because Lioli is not an easy team and feels should they have converted their chances; they would be singing a different story. He went on to say he believes it was a motivation to his players to weigh themselves into competing with the big teams in the country.

After going one man down, the team continued to press on their opponents and midfielder Thabo Masualle said he is disappointed to be facing suspension.

“I am serving a red card suspension and I’m not happy about it but I did a mistake and I must face the music. It was a very tense match on Saturday we wanted to win it and what I did…I don’t know but it just happened, I didn’t even plan it,” he said.

Masualle who seemed to be enjoying his day in the field, commanding well with his teammate Tseliso Ramafikeng, dived for the ball that was going into the net after it passed the goalkeeper and referee showed him a red card.

He said he is happy to be at Kick4Life and as one of the senior players in the country, he is aware of the expectations from him. He said his teammates do his job easier hence no pressure on him.

“They are the youngsters who are eager to learn so I try to guide them either during the training sessions or even on one-on-one occasions. I can see there is hunger in them to achieve so I am glad to help where I can” he added.

On Sunday Kick4Life will be hosting the Mafeteng side, Bantu at LCS grounds, and after emerging victorious in December when visiting Bantu, Notsi anticipate a tough encounter on Sunday.

“We have a history with them, we beat them on their own background and obviously they would be seeking revenge,” Notsi explained.

He said what makes this match even more interesting is the fact that they (Bantu) are fighting for their stake in the top4 while Kick4Life is looking to secure their place in the top8. Both teams will be without their key players who are out, serving red card suspensions. Kick4Life’s Morapeli Lesoetsa and Thabo Masualle are a pair expected to miss the match while Bantu saw themselves having to fight the battle with nine men after captain Thapelo Mokhehle and Sepiriti Malefane were sent on.

When K4L was first promoted in the premiership and also securing their place again in the Vodacom Premier League, the pessimists were plenty, the naysayers were near, and the doomsday forecasters saw nothing but darkness for the Old Europa based but now find themselves as one of the fast recognised deadly growing team.

And Director of Football at Kick4Life Chris Bullock said he is happy with the growth of his team, both on and off the field.