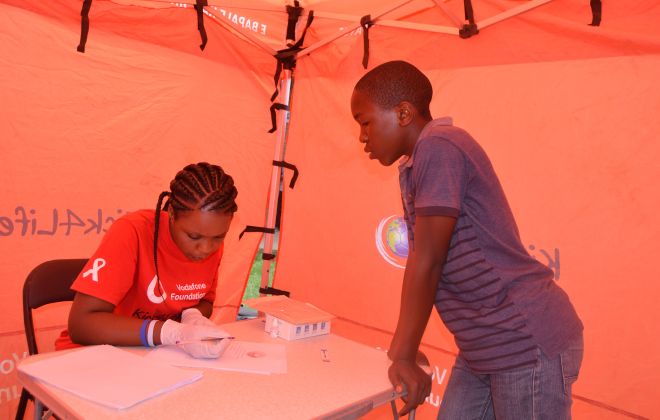 Children and young people between the ages of 12-20 turned up in large numbers for the Vodafone Test Your Team event at the Kick4Life Centre this Saturday (20th February).

The ongoing Test Your Team campaign, organised by Kick4Life in collaboration with Vodafone, is aimed at sensitizing the youth and children on the importance of knowing their status. Children go through HIV/AIDS counselling sessions with counsellors found at Kick4Life and they also play different sporting codes, still as a form of making them comfortable and sharing ideas and thoughts on why they need to test.

Mamoliehi Khiba, one of the organisers for the event, said she is happy with the turn up because it shows that children are willing to test. “We had initially planned for 300 children but we were surprised when we went to pick them up at their places when we found that they had exceeded the number we expected. The only problem or a major challenge is telling a child that she is HIV positive because he/she will be crying and we therefore have to take her through counselling,” Khiba said.

A 17 year old Karabo Mabote from  Mazenod, Ha Paki said he was delighted to have come to Kick4Life because he got a chance to go to the testing room and know his status. Although it was not his first time to get tested, Mabote said it had been a long time since he last tested for HIV/AIDS.

“I know Kick4Life, everybody at home knows it and what they do. We come here to play and attend life skills sessions. Kick4Life teaches us about HIV/AIDS related matters, we get counselling before we go in and I can proudly say I know my status today because of Kick4Life,” he said.

Fourteen year old Nkeletseng Thanyane added during a life-skills session:“It is important to make my own choices on whether I want to get engaged in sexual activities or not because the consequences that are likely to arise, either HIV/AIDS or STDs, will have to be dealt by me directly not any other person”.

Out of 300 children from the areas of Mazenod, Ha-Makhalanyane and Ha-Motloheloa, 160 tested on the day and 7 were found positive.