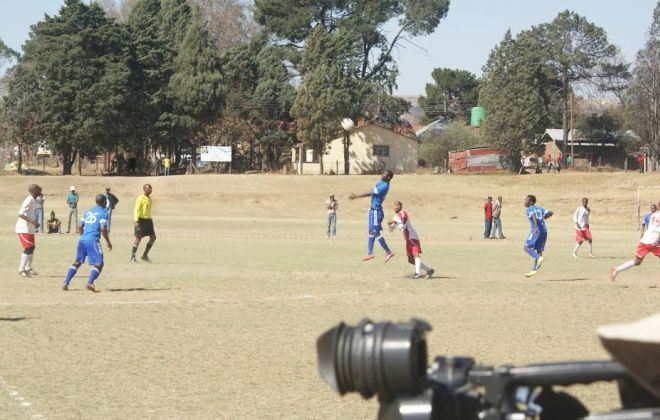 Seventeen year-old Lesia Thetsane was the late goal hero as Kick4Life F.C. opened their Premier League account with a deserved 1-0 victory over Likila United, who went in to the game with a 100% record.

Young goalkeeper Rorisang Moabi was chosen ahead of the on loan Sele Thetsane in goal for his debut, replacing the absent Mokhanya Mokhanya, while 17 year old Moalosi Mosoeu came in at oleft back and Tseliso Ramafikeng came in to midfield.

Kick4Life looked to make an early impact in the game and almost went in front in the fourth minute. Robert Mekomba won the ball in midfield and played an excellent ball through to Thabiso Brown, whose thunderous shot on goal was beaten away by the Likila ‘keeper.

Kick4Life then won a free-kick on eleven minutes when Fidele Ntoya-Malonga was brought down 25 yards out. Brown looked to curl the ball towards goal, but cleared the crossbar.

The home side had an excellent chance to go in front on 17 minutes. Motlalepula Chabeli brilliantly switched play from left to right where he found Lesia Thetsane in space whose volley was parried out by the goalkeeper, before falling to Brown at the far post but his effort went over the bar.

It was all Kick4Life, with Mekomba and Ntoya-Malonga dominating midfield, and they had another opportunity on 25 minutes. Ramatsoso Mopeli hot a long free-kick in to the box, where he found Brown, but his header went wide of the goal.

Mopeli had the next opportunity for the hosts four minutes later when he met Ntoya-Malonga’s corner but his header also went wide.

The visitors finally had their first chance of the game on 32 minutes when a ball in the box found a striker unmarked but his header looped wide of the post.

The home side had a huge let off three minutes before half-time. Moabi tipped away a corner, but when he came for the ball as it was returned in to the box, he failed to gather the ball and the ball was headed towards goal but came back off the bar.

Ntoya-Malonga was the next to go close on 45 minutes. Chabeli cut inside from the left and beat a defender before laying the ball off to Ntoya-Malonga whose first time thunderbolt was heading for the top corner before the ‘keeper somehow managed to tip the ball over the bar for a corner.

Ntoya-Malonga also had the next effort on goal in stoppage time. The Congolese midfielder, who was having a fine game, flicked the ball over a defender before hitting a dipping volley over the bar.

There was still time for one more chance before half-time when Chabeli hit a tame shot towards goal and the ‘keeper fumbled his shot, but a defender was more alert than Brown and managed to clear away to ensure the teams went in to the break level.

Kick4Life had their first effort on goal of the second half on 50 minutes. Good work by Thetsane, who was linking up well with fellow teenager Mosoeu down the left, found Brown. He beat his manbefore shooting powerfully towards goal, but his shot went just wide.

Brown was in again on 61 minutes after some nice build up play, but he shot wide under pressure from a defender.

Kick4Life made a double substitution on 69 minutes. Mekomba, who had an excellent game in midfield, and Brown made way, with Khosi Mafisa and Mojai Selatela coming on.

The second half was proving to be more scrappy than the first half and the visitors went close on 72 minutes. A dangerous ball in from the right went right across goal but nobody was there to meet it and Moabi was relieved to see it go wide.

Kick4Life made another change on 76 minutes, with Morapeli Lesoetsa coming on to replace Chabeli.

The home side finally opened the scoring with nine minutes remaining. Ntoya-Malonga’s corner wasn’t cleared properly, and when the ball returned to the midfielder, he played a great ball across the box to THETSANE who swept the ball home.

There were no real threats from Likila in the remaining minutes of the game and the home side were able to see the rest of the game out and celebrate an historic three points, their first ever in the Premier League.