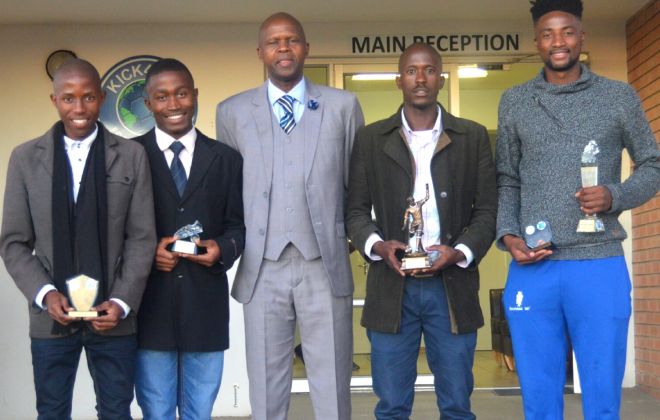 Kick4Life held the club's annual end-of-the season awards ceremony at the Kick4Life Centre, with the Golden Boot; Most Improved Player, Players' Player; Young Player of The Season, Chairman's Award and Player of the Season awards all up for grabs on Saturday evening.

Central Defender Likano Teele walked away with most prestigious award of the day when being named the Player of the Season.

Accepting his award, Teele thanked his teammates and the technical team for believing in him since he joined the club. “I would like to thank my coaches for giving me the opportunity to showcase my potential in the pitch, my teammates who always made the job easier for me and also my family for the support they have always given me. I am really honoured to be recognized by the club,” he said.

He was presented with a trophy together with the price money. After having a season of many challenges especially at the beginning, Coach Leslie Notsi praised his team for all their hard work they put at training and matches.

“I would like to humbly thank the management for supporting us once again this season, it was a transition period and we were already aware that it was not going to be easy. We lost three players who happened to be our top scorers last season but I am proud of my players because they stood up and fought for this beautiful team,” Notsi highlighted.

The Director Of Football Chris Bullock also thanked the club’s sponsors for supporting the team and said, it is through their help that Kick4Life continues to grow. He further congratulated the winners of the day and said they deserved to be acknowledged.

As a token of appreciation, the club presented the appreciation awards to the sponsors, KFC Lesotho, Econo Foods, Lekhalong Water,Vision clinicand Brandit.

Player Of The Season: Likano Teele