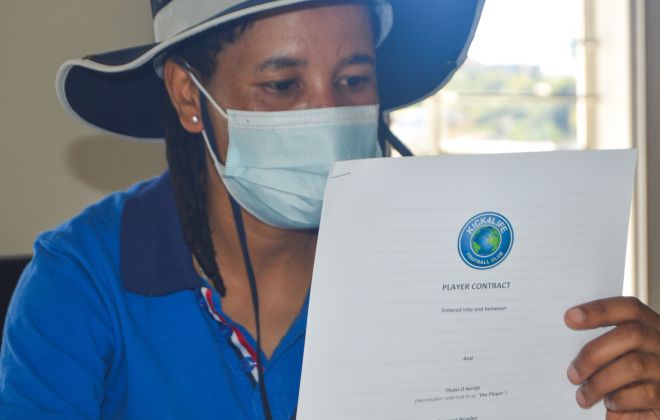 Sentje – I have become a better person

It’s an exciting moment for Thato Sentje, who has just signed her first ever football player contract after being in action for more than a decade.

For her, football is not just a sport, it’s a platform for both men and women to express themselves. Growing up, she had to overcome challenges, including the loss of her parents at an early age. She was raised by her grandmother at Ha-Thetsane, along with four of her cousins, but the difficult circumstances meant she could not afford to complete high school.

She has also faced stigmatisation towards girls playing football.

Sentje started out as a participant on various Kick4Life courses: “We would have coaches coming over to our school to educate us on the life skills and HIV/AIDS related issues.” She then started attending sessions at the Kick4Life Centre on weekends.

“Life at Ha-Thetsane can be very challenging, it needs one to have a strong self-esteem, which is what I developed through the programs at Kick4Life. Most children are faced with being involved in activities which often put them on the wrong side of the law, and I was fortunate to be part of Kick4Life,” she said.

Sentje progressed to becoming a Kick4Life Coach and facilitator, and is currently a Girls United Coach, working with vulnerable girls young women on topics such as gender rights, tackling gender-based violence and sexual & reproductive health education. She is also an Ambassador for Champions United, a program which works with boys to promote gender equality. She says: "It was a great initiative by Kick4Life to establish these programs as they have created safe spaces for girls and boys to discuss issues affecting them."

After eleven years at Kick4Life, 'Cheese', as she is also known, expressed her excitement to be part of an important milestone, as the team becomes the first football club in Lesotho to hand player contracts to women: “I feel so proud to be part of the history that is happening today. It’s a motivation to my dear sisters to know that they can achieve anything that they wish for. I regard myself as a living proof because not only do I play for Kick4Life, but I have also played for the national team, it’s always an honour to represent my country.”

Looking to the future, as well as continuing to play football and helping to deliver Kick4Life's important programs, Sentje hopes to someday establish her own business and contribute to the sustainable development of Lesotho.