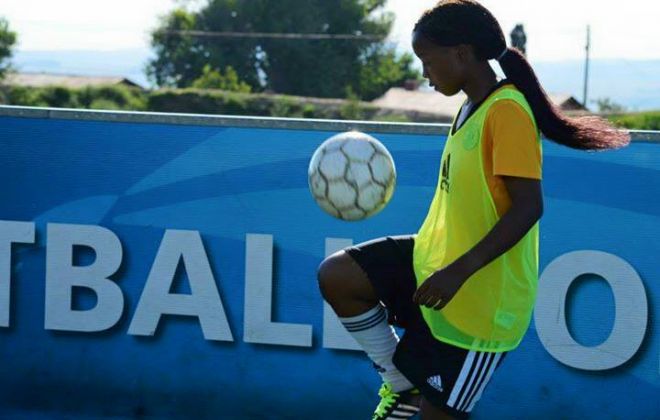 July 28, 2017 | General News, K4L Academy, Women's Team
As Senate Letsie prepares to leave for the United States, becoming the first woman from Lesotho to gain a soccer and academic scholarship, Steve Fleming, K4L Co-founder, reflects on her incredible journey with Kick4Life, and considers what it means for women's football and gender equality in the Mountain Kingdom...
We stepped off the air conditioned coach onto the dusty road that cut through the township of Khayelitsha. To the right music blared from a tiny shop with makeshift walls and a handwritten sign; inside a rickety fridge behind a counter containing dubiously bottled offerings of Coca Cola and Tango Orange. It was hard to believe that somewhere nearby was a brand new 5-a-side artificial football pitch.
It was 2009 and we were in Cape Town's largest township for the opening of the first Football for Hope Centre, hosted by our partners Grassroot Soccer. Twenty such facilities were planned across the continent, a flagship legacy of the 2010 FIFA World Cup in South Africa. We were in the hunt to host a centre in Lesotho and had been invited to bring a delegation of young people from Kick4Life to participate at a festival celebrating the inaugural opening.
Today's tournament was the showpiece event, and the emergence of the bright green field was like the appearance of an oasis in the desert, a tranquil pool amidst the seemingly endless disorder of the surrounding township. The piercing radiance of a thousand small suns reflected from corrugated roofs in every direction, and boy was it hot! Not a day to be wearing a suit.
Pete had told me there was a special player in the Kick4Life delegation that would be competing against teams from around the world, but in the warm up I couldn't spot him. I asked my brother who it was and he indicated a diminutive figure on the opposite side of the pitch. It wasn't a him, it was a her. It was Senate Letsie. She was 15 years old.
I can't remember the exact order of matches, but the Kick4Life team started well and Senate was unquestionably impressive. Then, disaster struck as she went to ground under a heavy challenge. She left the pitch in tears, hobbling badly. Her tournament was over.
Below: the K4L team lines up against the local GRS team from Khayelitsha 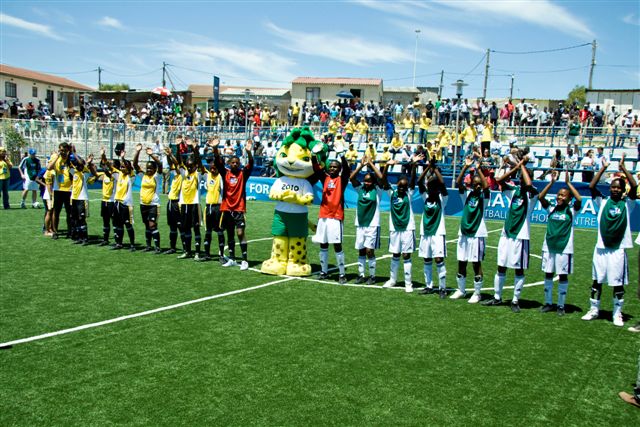 Or so we thought. Another win would see Kick4Life qualify for the knock out stages and Senate insisted that she would be playing. We told her it was a bad idea - she could hardly stand, and we explained that playing with an injury could just make it worse. Yet somehow the starting line-up for the next game included Senate. She was not particularly mobile, but every time she received the ball her the touch was sure and her contribution telling. Kick4Life won 4-1 and Senate scored a hat-trick.
The hobbling figure and her teammates progressed to the semi-finals where they faced the local Khayelitsha team roared on by a packed crowd from the surrounding community. It was an intense, high pressure atmosphere but Kick4Life held their own and the game went to penalties. It was not to be, and the young players fell despondently to the ground as the victors lapped up praise from the jubilant home crowd. Over the noise we told them how proud we were, and we meant it.
With the excitement of the wider festival and their new friends from around the world, the disappointment did not last long, and the next day they joyously ran across the sand of Camps Bay beach and into the icy sea for the first time in their lives
In the years that followed I often saw Senate on my trips to Lesotho, normally as one of our inspiring young coaches selected to work with our tour groups from the UK, sometimes playing in our team and sometimes for the opposition - a Xavi type figure in the midfield, controlling play and effortlessly moving the ball and finding space.
Below: Senate at the Awards Night for the 2013 Saints Foundation Tour with her new friends Phil & Rosemarie 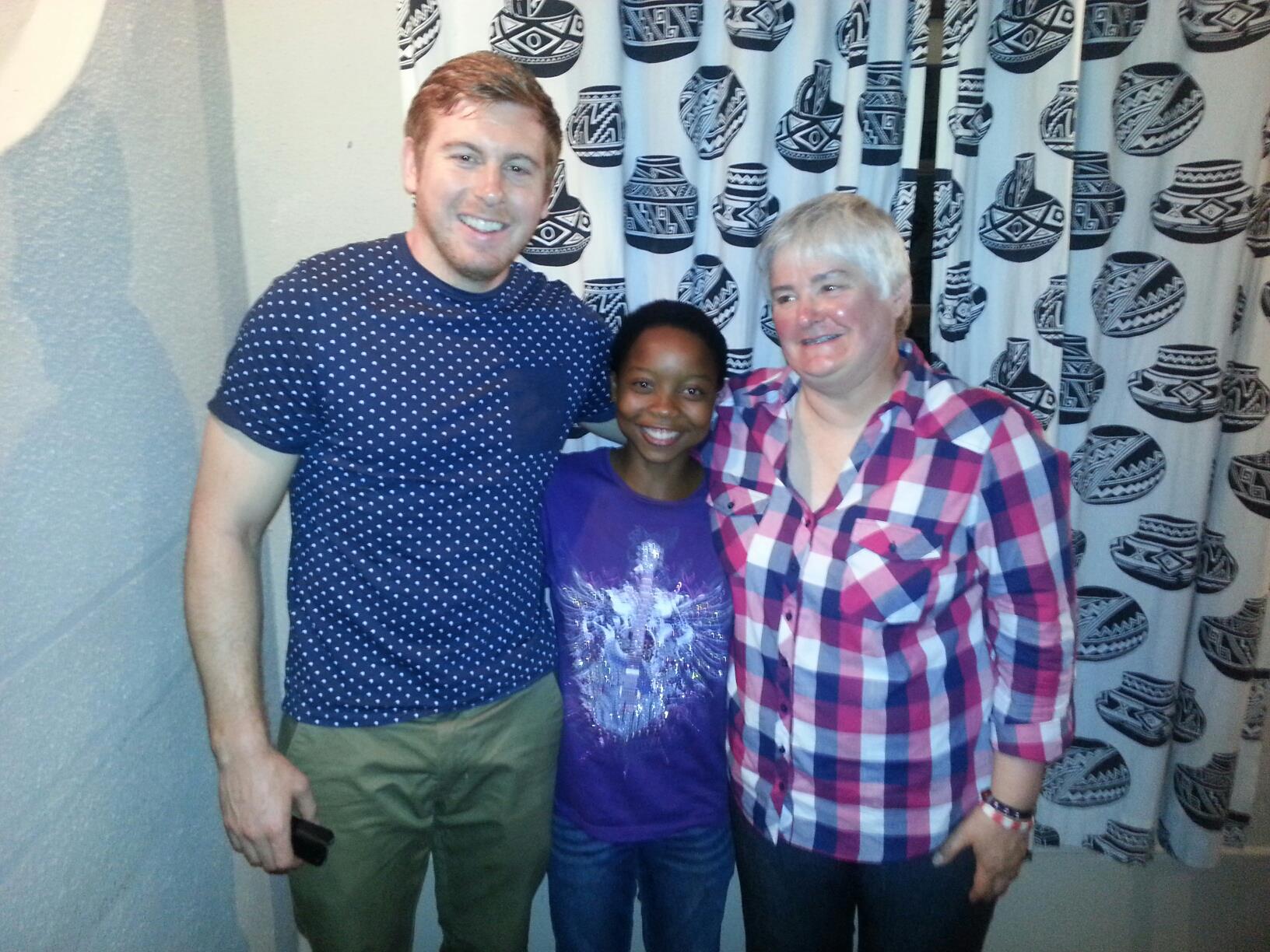 While Senate progressed, so too did women's football in Lesotho. Gender equality is a core pillar of Kick4Life's approach and over the last two years it has been exciting to work closely with the Lesotho Football Association to launch the Super League - a new structure that is helping to promote the rights of women to play sport in Lesotho, and challenging gender discrimination more broadly in what remains a very male dominated society. Senate, among others, has been at the heart of this, not only a star player for Kick4Life and the Lesotho national team but also a role model for other girls, inspired by her dedication, resilience and positivity.
Earlier this week we announced the most exciting development yet in Senate's journey, having secured a fully-funded scholarship for her to attend Lewis & Clark Community College in Godfrey, Illinois. Senate will be joined by Morapeli Lesoetsa, one of the most exciting young players in our men's team, both following in the footsteps of Mako and Lesia, the first K4L Academy graduates to progress to genuinely life-changing educational opportunities when they joined State Fair Community College in Missouri last year. Through leveraging this educational investment through football, we aim not only to change individual lives, but to create future leaders of sustainable social and economic development in Lesotho in health, business, academia, sport, civil society, engineering and many other sectors that contribute to the Sustainable Development Goals (SDGs).
Senate is the first woman from Lesotho to ever secure a soccer scholarship in the United States. She is an undoubted trailblazer for her country and we are excited by the possibilities this will open for her, and the many young women that we hope will follow in her path. I believe this is most significant achievement of K4L in terms of the journey of one individual and everything that it symbolises. We are incredibly grateful to those who have helped to make it possible. Go shout it from the rooftops, Senate is coming to America! 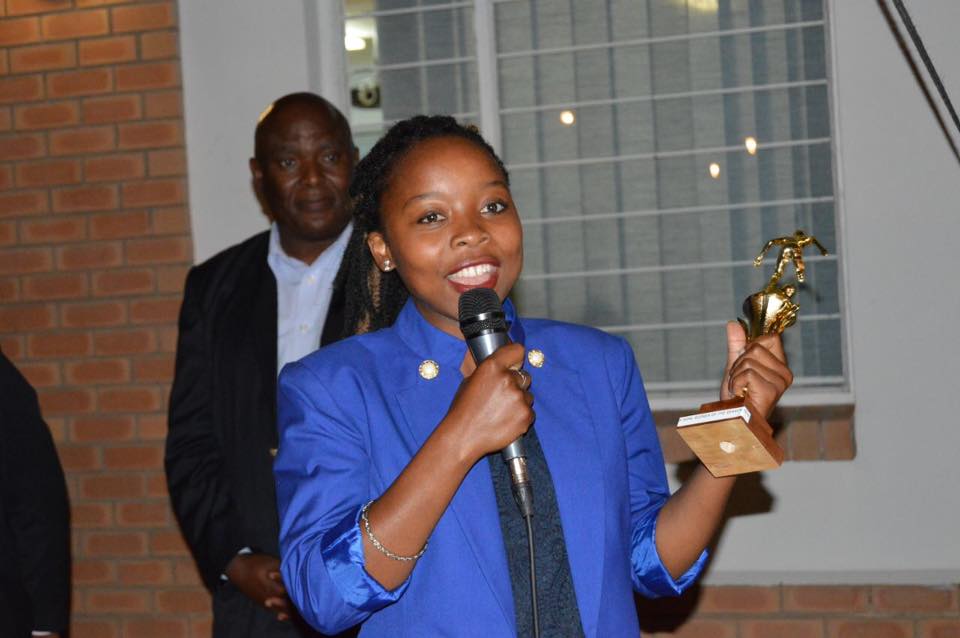