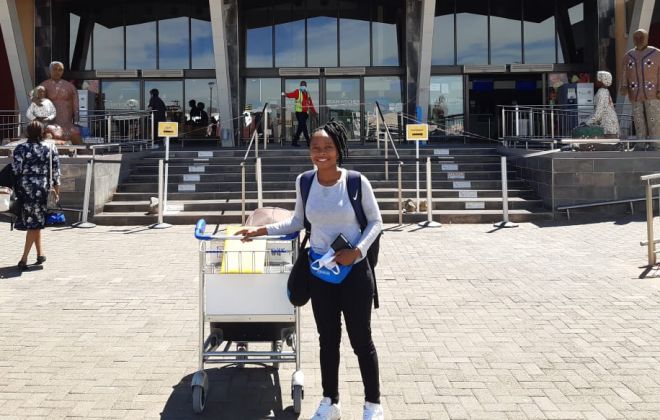 Kick4Life student-athlete Senate Letsie has travelled to Canada from Maseru where she will study for a three-year Bachelors of Arts in General Psychology at Cape Breton University. Secured with support from the Academy team at Kick4Life, the scholarship will see Senate pursue her academic studies as well as representing the women’s soccer team, with opportunities to play across Canada.

eaking to Kick4Life media before the move, the talismanic figure said: "I feel so happy to have been afforded this opportunity, it's a big responsibility that I am prepared to embark on. I will work hard both in my studies and football in order to represent my country well and women in sports, particularly football."

A star player of the Lesotho national team, Senate, who graduated from the Lewis and Clark University in the United States of America in 2019, helped Kick4Life women become Super League national champions in 2021, scoring a brace in the final against tough rivals LDF. She completed the tournament with 13 goals and was one of the top scorers.

Congratulating Senate on this great opportunity, Director of Football Lepekola Seetane hailed her for her efforts and hard work in her studies and football career. He said Senate portrays a good example of a determined footballer: "We are excited for Senate that her journey continues with the support from Kick4life. She continues to be a role model for young female footballers in Lesotho and we are hopeful this move paves a way for more aspiring student-athletes within Kick4Life and across Lesotho."

Sharing the same sentiments with Seetane is the Country Director of Kick4Life Motlatsi Nkhahle who expressed his excitement and support to Senate as she continues her journey in the classroom as well as the field of play: "Senate is not only representing herself but other female footballers who have not received these opportunities so it is important that she continues to work hard and represent us well. Her contributions within the Kick4Life community speak volumes and we are really proud of the person she is."

Senate also holds a Diploma in Pastoral Care and Counselling from the National University of Lesotho in 2016, where she graduated with distinctions.