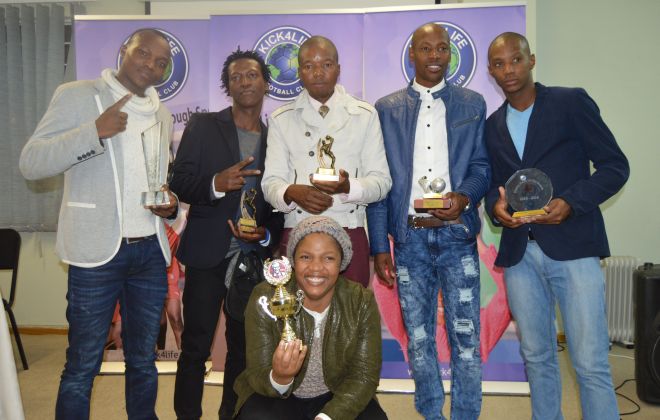 Kick4Life FC held their annual end of season awards ceremony at their premises on Friday night, after what has been a record-breaking 2015/16 campaign for the Old Europa outfit.

After finishing sixth on the log, Kick4Life held a night of champions to honour their players for the hard work they put in the “just” ended premiership season, and Kick4Life Country Director Rhett Power congratulated the players for their hard work and said he is certain that the founders of Kick4Life, Steve Fleming and Pete Fleming are proud of the team. Power went on to say they are building the best team in Lesotho with a winning tradition and a team of role models and characters.

Setting a target of finishing in the top8, they knew it was not going to be easy but having a calibre of the team he has, he was confident they will achieve it. This was said by Director of Football Chris Bullock who said finishing sixth on the log on their second season in the premier league is a great achievement despite the challenges they encountered along their journey.

“We changed the coach in the mid-season so you can imagine what impact that does to the team, but we were pleased to bring one of the best coaches in the country to work with us, and he helped the team to perform well,” said Bullock.

He went on to thank their sponsors and the supporters for their commitment in the team, and said there are positive signs of growth as they have a number of players getting the national call ups.

The team’s coach Lesli Notsi thanked his troops for making his job easier and also showed a word of appreciation to the management of Kick4Life for believing in him.

“Six months when I joined the team I got a perfect reception, I saw players with a winning hunger so what I had to do was to sit down with the technical team and map a way forward on how we can achieve our goal, and we did achieve it,” he said.

Notsi went on to say he was happy to say his team was amongst the best movers in the league when the season came to an end.

Player of the Season: Sele Thetsane

The Team’s Supporter Of The Season: Lineo Letlaka