Phantse fires Kick4Life to victory over Likhopo in EPL 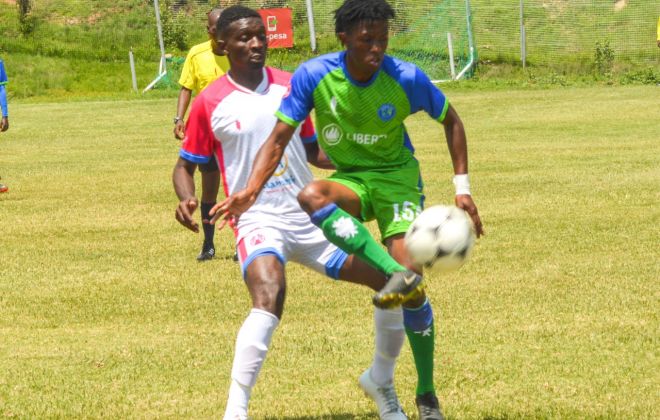 A second half strike by Sanele Phantse saw Kick4Life edging Likhopo 1-0 to claim all the three points in the Vodacom Premier League on Wednesday afternoon at LCS grounds.

The result see Kick4Life moving to the 11th position in the log standings. However, this is subject to change after Thursday’s results. Coach Motebang Makhetha started with the same team he picked against Bantu on weekend.

The game started on a high note with both teams being on each other’s toes. Thabiso Mari was flagged for an off side in the 2nd minute while Tanki Seoli made an excellent cross into the box in the 7th minute. Mari was unfortunate to miss a chance in the 15th minute.

Relebohile Thulo nearly put Kick4Life upfront from the set piece in the 26th minute when his free kick went close to going in. Maphika Matobako was presented with a glorious chance to open the scoring but he rifled high at goals just before the break.

After the break, Mari was at it again, making a beautiful turn only for his shot to go over the bar in the 49th minute. Likhopo were then made to pay for their missed chances as Phantse found the back of the net in the 51st minute, a well-played ball by Teboho Lekhooa.

Liteboho Mokhehle was called into the action after the hour mark to stop the danger and keep Kick4Life in the lead. Then in the 75th minute, Coach Makhetha was forced to change his plans, after Mokoteli Mohapi was stretched off the field due to an injury. However, Kick4Life managed to hold on to their lead until the final whistle, picking three points on the road.

This will be a great motivation to the Old Europa side as they host LDF, who also won against Linare, on Saturday at LCS grounds.