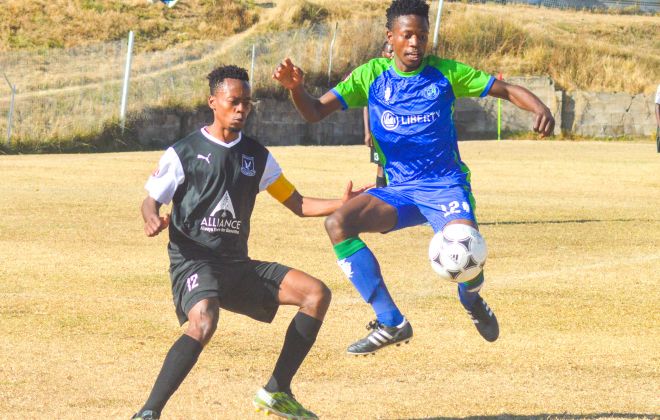 Goals from Sanele Phantse and Rapaulina Maime helped Kick4Life claim a 2-1 win over Manonyane and continue their winning streak in the Vodacom Premier League on Wednesday afternoon at LCS grounds.

All the match goals came in the second half, after both teams could not be separated in the first half. The win moves Kick4Life to the 6th place in the log standings with 21 points, and they look to wrap up the first round with another win when they visit LMPS on Sunday.

The first half didn’t produce much of the action as both teams seemed to be more tactical. Two real attempts were made late before the break, Teboho Lekhooa blasting the woodwork in the 31st minute. Shortly thereafter, Matobo missed a golden opportunity when he fired wide in the 35th minute.

Mongezi Mologovane was not having a good day in the field, and he missed a glorious chance to give his side the lead soon after the break. Phantse, however found the back of the net in the 56th minute, placing the ball at the far post to open the scorings.

Just when Manonyane were still trying to recover from conceding, Maime doubled the lead for Kick4Life into the hour mark. After missing out in most of the games of first round, Ts’eliso Botsane finally made his appearance in the 77th minute.

Manonyane pushed for a goal to redeem themselves and Sello Sekike was finally rewarded for his efforts five minutes before time, when he shot past Liteboho Mokhehle to pull a consolation for his side.

Man Of the Match: Teboho Lekhooa