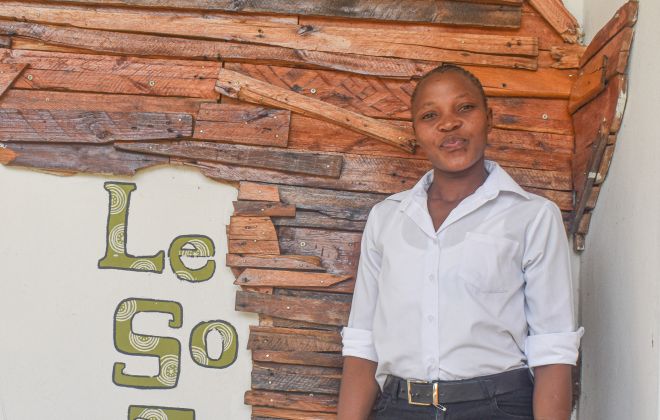 Pepper shines on & off the pitch

As 2023 gets underway, we are delighted to celebrate the achievements of ‘Mathebe 'Pepper' Ramphielo, a 26-year-old Kick4Life FC defender in the senior women’s team, who has been involved in the organization for the last decade. As part of the growth of women's programmes and women's football at Kick4Life, Pepper has been a true pioneer of social change and football in Lesotho. She was also part of our team that became national champions of Lesotho for the first time in 2021.

Born in Mokhotlong and raised in Maseru, Pepper joined Kick4Life in 2013 as a footballer, a gateway to accessing a wide range of development opportunities including the Good Health & Well-Being through Football Curriculum which covered key health topics including HIV prevention, hygiene & sanitation and nutrition. There was also a strong focus on life-skills development where Pepper improved her self-confidence, developed resilience and strengthened skills such as teamwork and leadership.

After subsequently completing the Girls United curriculum, focused on gender rights education and women's empowerment - Pepper was trained as a Girls United coach herself, and she continues to deliver the course to vulnerable young women in and around Maseru. She has also now progressed to a traineeship at Kick4Life's No.7 Restaurant where she is employed Front of House within the social enterprise and is developing key skills towards a career in hospitality and towards achieving a long-term sustainable livelihood.

Reflecting on her time at Kick4Life, Pepper picks out a trip to the 2014 FIFA World Cup in Brazil as a particular highlight, where she was part of a Kick4Life delegation alongside young people and youth organisations from around the world.

Kick4Life's Director of Women's Programmes Maphoka 'Puky' Ramokoatsi says: “Since her arrival at Kick4Life, Pepper has shown growth and matured in many aspects. She is a very confident person and always stands up for what she wants - for example she took a course in carpentry and joinery, something that is unusual for a woman in Lesotho, and she even did some work in that field. She is a hard worker, she can multitask and is always willing to try new things and excel in them, and is always an accommodating and generous person."