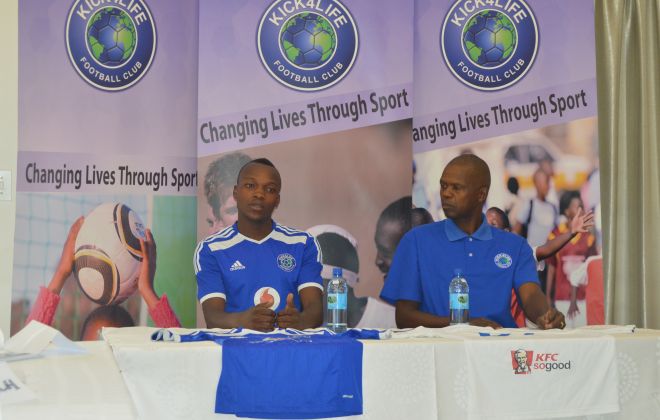 Notsi satisfied with progress towards top 8

Now with only five games left before the wrap up of the 2015/16 Vodacom Premier League season, Kick4Life coach Leslie Notsi said his side is still on track for finishing up in the top 8 spot.

Kick4Life picked an important point against LDF on Sunday, stretching their unbeaten run to four. Although the team is yet get a win after three consecutive draws, the team’s mentor is confident his troops will pick up the maximum points in their remaining matches.

“We are in a position where I can say we have been doing well, we are happy with our position in the log standings but at the same time we still believe that we can do better than where we are now,” he said.

Notsi went to say there are games he believes they could have got maximum points, but only managed to get a point. However, the positive sign is that the players have really shown progress in the field in terms of composure and creating scoring opportunities.

The heroic goalkeeper Sele Thetsane who on Sunday stole the show especially in the dying minutes of the game said his teammates make his job easier in the field. “Credit has to go to my teammates, goalkeeper coach and everyone in the Kick4Life family. They have really stepped up for the team whenever being called into action,” Thetsane said.

The magic gloves man has seen his performance growing to greater heights and saving the team in several occasions. He was a talk-of-town after denying Mafa Moremoholo a penalty in their 0-0 draw, and he did it again on Sunday, denying LDF victory with his double saves.

This weekend the premier league games go for break due to the L.N.I.G top 8 quarter finals and will only resume the following week, with Kick4Life visiting Likila in Butha-Buthe before coming back to host Lioli at Setsoto Stadium.