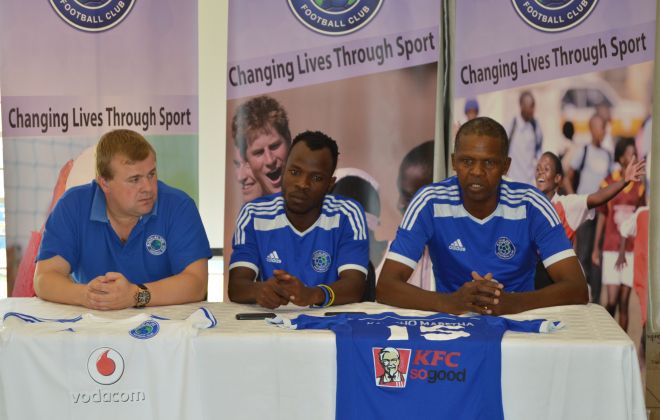 Kick4Life coach Leslie Notsi said he was impressed by his players on how they handled their 2-0 victory against Liphakoe last Sunday at Quthing.

This, Notsi said during the media briefing where he said he was happy for his players to have gone to Quthing and claim the three points. “It was one of our toughest matches, physically and mentally because the past two games, we have not been winning. We faced a team that was has not been doing well in their own back yard, so they wanted to come back against us and their morale was very high but my players showed character especially in the first half where Liphakoe were really on to us,” he said.

Kick4Life returned to their winning ways on Saturday against Liphakoe with an impressive 2-0, and for them to record victory away from home is something they can take into account. The Maseru outfit were aware of the task in hand but did not go there expecting anything less than three points.

The coach went on to say they had planned to hold tight in the first fifteen minutes because they knew Liphakoe would be coming to them strongly, and they just had to keep shape and capitalise on every space they get.

“They were actually playing a very offensive game but at the same time leaving spaces behind which we took advantage of, playing the ball behind their defence and it worked in our favour.”

He also expressed his delight for his strikers who have been facing a goal scoring drought, but the weekend’s game was different as two of his strikers found the net.

Forward Kamohelo Makateng said it was a much needed win and they had to do it for their supporters who have always been ralling behind them. He indicated that they approached the game as a cup final.

“To us it was like a final, we had to give it all our best and we were happy with the results. We knew Liphakoe had not been playing well in their past games and they wanted to start picking points, so to us it was like facing a wounded tiger and it was always going to be difficult,” Makateng said.

Makateng concluded by saying they are hoping to extend their winning record when they face Mphatlalatsane on weekend but pointed out that they are aware of task they will have to go through.