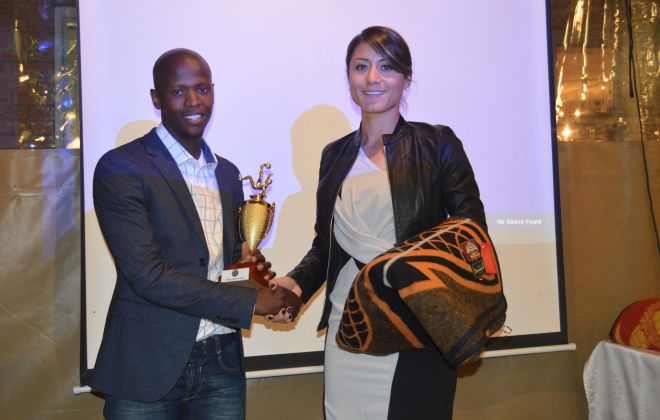 Mothoana named Player of the Season

Kick4Life midfielder Bokang “Lefty” Mothoana was named the club’s Player of the Season at their third annual awards ceremony held at Old Europa on Friday night.

Consistent in midfield, Mothoana weighed in with some crucial goals and assists throughout the season. The club had their most impressive season to date, finishing 4th in the Premier League table.

When accepting the award from Academy Director Hana Taiji, Mothoana thanked his teammates and the technical team for believing in him. “This award goes to my teammates who played a vital role in helping me perform in the field, the supporters who always rally behind the team and ofcourse even my coaching staff, I would like to say thank you,”

The club celebrated their achievements of their players during the 2016/17 season at a glitzy ceremony attended by Kick4Life players, technical staff, Management team, sponsors and other dignitaries who have played a role in shaping the brand into the formidable force it is in Lesotho Football.

Congratulating the players, Director of Football Chris Bullock said: “We took everyone by surprise, we had lots of highs this season and I am proud of everyone who participated in helping the team where it is today, from the management, technical, the players, sponsors and the supporters.”

Meanwhile, other winners were: