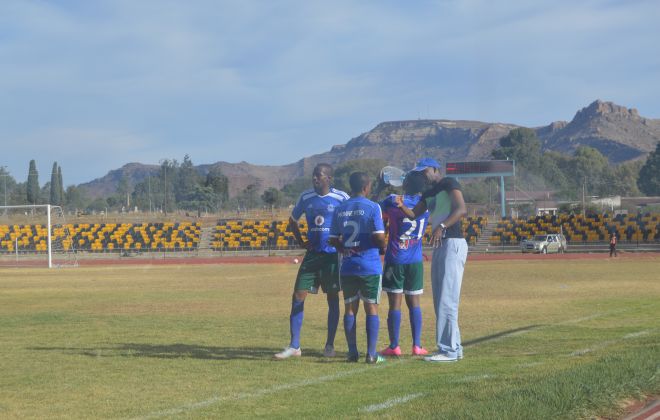 Kick4Life produced something of special to the whole family of K4L on Sunday afternoon when they beat Bantu at Seeiso Leshoboro Stadium.

Coming into this game regarded as the underdogs, Leslie Notsi’s charges caught Amats’o Matebele by surprise when they beat them on their home soil, the ground said to be the slaughter house where Bantu do not lose. In fact Kick4Life have been a headache to the big VPL teams seeing them holding Lioli to a goalless draw, not only a draw was enough but denying Lioli’s Mafa Moremoholo a penalty caught the attention of the footballers of Lesotho.

The team of social change stole the show when hosting Likhopo and rising against all odds to deny the Red Devils three points. Again, they denied their opponents right from the spot. Right now it remains to be seen as to which team will be brave enough to convert a penalty against Sele Thetsane. Perhaps his movements on goals have caused strikers to be shaky when facing him. Four penalties have been missed against Kick4Life.

The season goes to the break seeing Kick4Life having collected sixteen points. They have won three of their away games beating the VPL veterans LCS, Linare and Bantu, went down on three clashes against Matlama, Rovers and Mphatlalatsane and drawing seven league matches. In their last three games they managed to keep a clean sheet, something that can be regarded as a great improvement.

K4L has also strengthened its reputation as the team of youth development. The 2015/16 rookies Relebohile Thulo and Mako Makoanyane have been so instrumental in the team featuring in some of the big fixtures Kick4Life has played and holding their on in the top flight.

Going for the season break with a win, the morale is very high in the team and with the new coach, everyone is working hard to find himself a place in the line up.