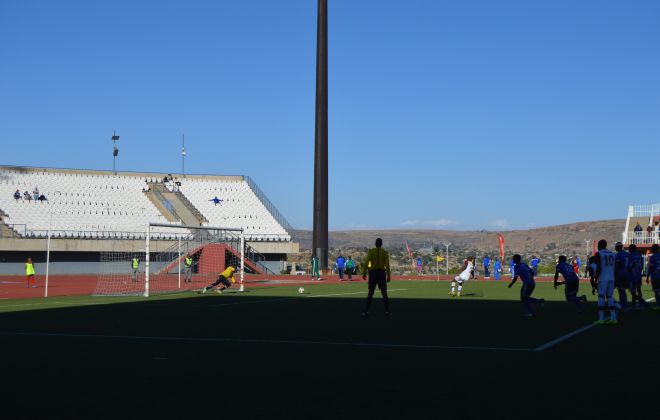 Kick4Life face a tough match on Sunday when they square off with Bantu United at Mafeteng in the Vodacom Premier League tie. Kickoff is at 15:00hrs.

Kick4Life have managed to pick a point from Premier League veterans Lioli and Likhopo and they will have an extra spring in their step when they meet Bantu.

Kick4Life midfielder Relebohile Thulo said they are playing Bantu at their home ground and are well aware of the size of the task at hand as well as the pressure they will get from their opponents. “It is going to be difficult especially playing them at their home soil where they have the large support base and losing at home is what they will be avoiding. But to us it is important that we pick maximum points because we want to end the first leg on a high note”, said Thulo.

The 2015/16 Vodacom Premier League debutant, Shakira, as Thulo is sometimes called by his teammates said the morale is high in the camp and everyone is looking forward to Sunday. “The morale is very high, the last two points have been significant and the coach has also been encouraging us,” said the midfielder, who only earned his promotion from the development to the senior team this season.

A lack of consistency in the team is one of the biggest worry for Motlatsi Shale as his side saw them recording their third loss of the season at the hands of Sandawana, when they (Bantu) have beat Linare a fortnight ago.

Lazola Jokojokoane who has proved to be a force to be reckoned this season in the Mafeteng outfit as he has been a key striker scoring important goals for Bantu and Leslie Nots’i’s men will have to keep a close eye on him.

Also, his counterpart, 2014/15 Vodacom Premier League top scorer Lits’epe Marabe who is on the autumn of his career with his failure to find his scoring feats mean that he would want to start scoring and return to his fine form. A talismanic figure in attack for Bantu only scored three goals so far in the league.

Bantu will try to silence the growing criticism of their poor performance after their slow start of the season, seeing them sacking coach Mojakhomo.

Last season Bantu defeated the K4L both in the first and second round of the league and continuing from where they left will be Motlatsi Shale’s charges’ intensions, while on the other hand Kick4Life will be hoping to record their first victory over Amats’o Matebele and add to their ongoing loss of form woes.