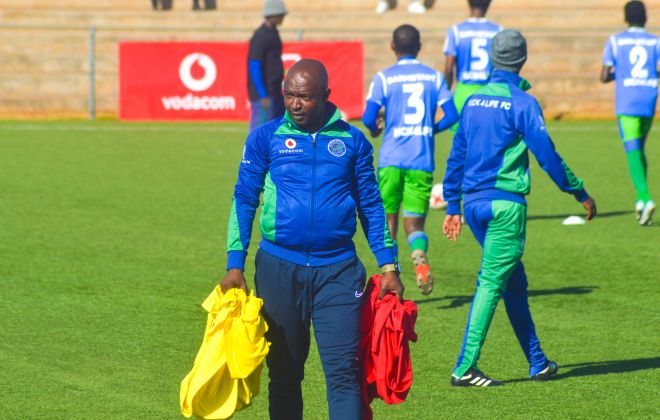 Kick4Life Coach Motebang Makhetha has thrown his weight behind his team to get positive result on Sunday when they visit Lijabatho in Morija in the Vodacom Premier League.

Kickoff is at 2pm

The Kick4Life mentor, who arrived this season has guided the team to 5 wins in 11 matches, and now the team is placed 8th in the log standings. Speaking ahead of Sunday’s encounter, Makhetha said his team takes positives from their last 2 matches where they collected 4 points.

“Unfortunately we are playing against a tied schedule where we play mid-week and weekends but my team is ready, we take yesterday’s point against Lifofane positively. If you ask me, I would tell you that the team is responding well towards these circumstances,” he said.

Asked on the absence of striker Mongezi Mologovane in the last two matches, Makhetha noted that indeed his (Mologovane) absence could be felt as the utility striker served his red card suspension.

“Mongezi is one player who can turn things around especially when the game is not going our way, we missed him but I should also give credit to his teammates especially in the striking department because we still managed to get a goal in his absence,” he said.

He welcomed the return of Moruti Thamahane who came on as a substitute in the second half, replacing Mohlomi Makhetha who was stretched off due to injury. He said Thamahane’s experience helped the team against Lifofane and he is hopeful that he will continue doing well in the upcoming games.

Reflecting on his opponents, the coach anticipated a closely contested affair as Lijabatho will be looking to get positive outcomes under the new leadership of former Matlama coach, Charles Manda. “They are now under the new coach and he didn’t start well so obviously he will be aiming for 3 points against us, but we are equal to task”.