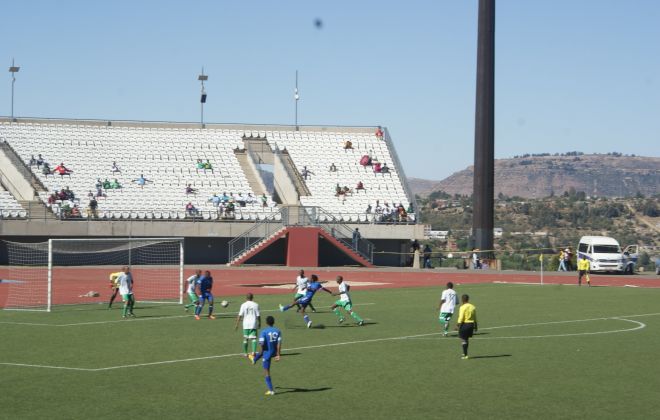 Katleho 'success' Mabetha capped a man of the match performance with the winning goal twelve minutes from time against Linare at the national stadium on Sunday, as Kick4Life F.C. secured their second victory of the season, to end a run of four games without a win.

Coach Motlalepula Majoro made eight changes from last week’s 1-0 defeat at Mphatlalatsane as the home side went for a 3-5-2 system. Meanwhile, there was a return for Thabiso Brown after making his international debut in midweek in Angola.

Kick4Life were finding the surface at the national stadium to their liking in the early stages as they passed the ball around nicely. However it was the visitors who had the first effort on goal, when Mabuti Potloane shot wide from 25 yards.

Although Kick4Life were enjoying most of the play in the opening minutes, Linare missed a great opportunity to take the lead on 11 minutes. A shot came in from the right side of the penalty area, and was deflected through to a visiting team player, but with time to finish, he could only blaze his effort over the bar from eight yards.

Kick4Life continued to come forward and started to create chances of their own. On 13 minutes, the home side were awarded a free-kick which Mabetha played short to Khosi Mafisa, and his curling effort was headed behind for a corner.

Kick4Life had another opportunity five minutes later. Good play between Mafisa and Mojai Selatela, resulted in the ball played back to Brown and his fierce effort went inches wide.

The hosts should have gone in front on 28 minutes, when they had the best chance of the game so far. Moruti Thamahane collected Mabetha’s sliced cross at the far post and played the ball back across goal, where Mafisa was waiting 15 yards out, but he could only fire over the open goal.

Tsiu Moorosi had the last chance of the half for Linare when he met a corner, but his header went wide of the far post.

It was a quiet opening to the second half, as Kick4Life continued to play some neat football. A brilliant link-up between Brown and Selatela then set up the latter, but he could only shoot tamely at the ‘keeper on 53 minutes.

Selatela had the next chance of game five minutes later when he met a deep cross from Lelakane, but his header went over the bar.

Just a minute later, a long throw from substitute Fidele Ntoya-Malonga found a congested six yard box at the near post, but the ball wouldn’t fall for a Kick4Life player and was cleared out as far as Lelakane, but his shot went a long way over the bar and towards the stands behind the running track.

Linare then had an opportunity to go in front when the home side failed to clear the ball properly, but a long range shot from outside the box went just inches wide.

Tseliso Ramafikeng, who  was having a fine game, up to this point, then gave the ball away in a dangerous area, but the away side couldn’t find the target, again firing a shot wide of the post. Potloane then went close again as he cut in with the ball and shot wide of the near post.

Kick4Life went back in search of the winning goal and with twelve minutes it arrived. Another long throw from Ntoya-Malonga wasn’t cleared properly, and MABETHA reacted first, calmly finishing past the ‘keeper.

Linare went in search of an equaliser in the remaining twelve minutes of normal time and six minutes of stoppage time, but despite some pressure, they never really threatened as Kick4Life saw the game out for a famous win.

Man of the match: Katleho Mabetha