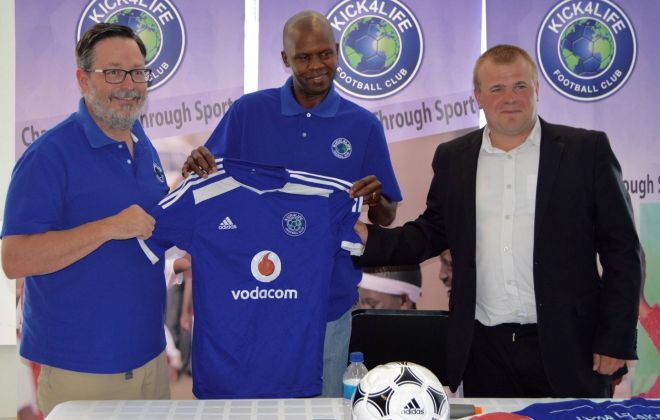 Announcing Nots’i as the incoming coach, Director of Football Chris Bullock said he was delighted to work with Nots’i with his record in management. Bullock said: "If you look at his background and the record he is carrying, it is always exciting to work with a coach of his calibre. When the 2015/16 season kick-started, we mandated ourselves to finish in the top 8 and I still believe Leslie can guide the team to that”, added Bullock.

Leslie Nots’i comes to Lesotho after spells in South Africa with Mthatha FC, Garankuwa United FC and United FC. Before leaving to Garankuwa, Nots’i held the reins of power at the Lesotho national team Likuena, guiding it to the fourth place in the regional COSAFA cup played in Zambia in 2013, where Lesotho ended the tournament as the top-scoring team. He has also previously coached Lioli and Matlama, leading clubs in Lesotho.

“I love working with the youth hence my decision to join Kick4Life. I will not only be focusing on the senior team but also the juniors here. And one another thing right now I am not going to make any changes in the team, I will just be focusing on the two games left and maybe it’s only then that we can sit down with the management during the transfer period and look at the areas where we can strengthen our team”, said Nots’i.

He went on to explain that his return into the country should not be taken as a setback because football in the country is still developing and wants to be part of that developing team.

Chris Bullock thanked Motlalepula Majoro for his important contribution to Kick4Life F.C over the last four years which included guiding the team to the Vodacom Premier League in 2014.

K4L Co-founder Steve Fleming added: "We are excited by the arrival of Leslie and look forward to further successes on the pitch, enabling us to leverage greater social change off it."