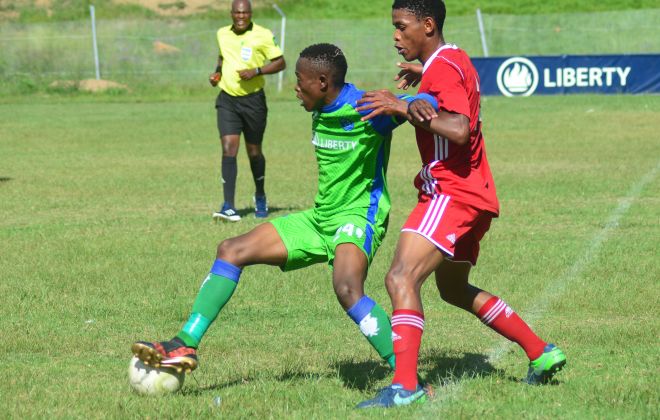 Teboho Lekhooa scored late in the game as Kick4Life claimed valuable 3 points and return to winning ways against the determined Sefothafotha side on Sunday afternoon at LCS grounds.

Lekhooa had just missed a golden opportunity in the 83rd minute, but he was quick to correct his error with a rocket shot in the 85th minute. Sanele Phantse returned to the starting Xi ahead of Mongezi Mologovane and the Quthing born striker made his presence felt in the field, opening the scorings in the 21st minute of the match.

Coach Paul Westren had made a number of tactical changes, swapping Tanki Seoli and Maphika Matobako for the right wing and right back positions respectively. Lepekola Seetane also enjoyed almost every moment in the pitch and he nearly got his name into the scoring charts when his shot missed the goals with inches in the 25th minute.

Kick4Life controlled most of the proceedings in the first half and a good combination between Ntsenyane and Lekhooa saw the latter going close to scoring his second goal in Kick4Life colours, moments before the break.

After the dressing room discussions, Sefothafotha came back aiming for a comeback and Mohau Mothibeli nearly pulled one for the visiting side but his shot was too weak to trouble Nkeane in the 59th minute. However, Liteboho Nkune was left frustrated after losing the ball infront of his goals and Relebohile Mosebo used that to his advantage as he made the score 1-1 at the 62nd minute.

Mologovane was recalled into the team and Phantse made way for him in the 74th minute. Khubetsoana Kamela was also introduced with less than 10minutes to play and the skilful attacker brought a huge impact.

Emotions erupted at LCS grounds when Lekhooa squandered a glorious chance in the box, the ball got cleared away in his feet when he tried to dribble passed the defenders. However, he was too quick to restore parity with 5 minutes left to play and helped Kick4Life move up to the ninth position in the log standings.

Man Of the Match: Tanki Seoli