Kick4Life claim a point against Lioli in EPL 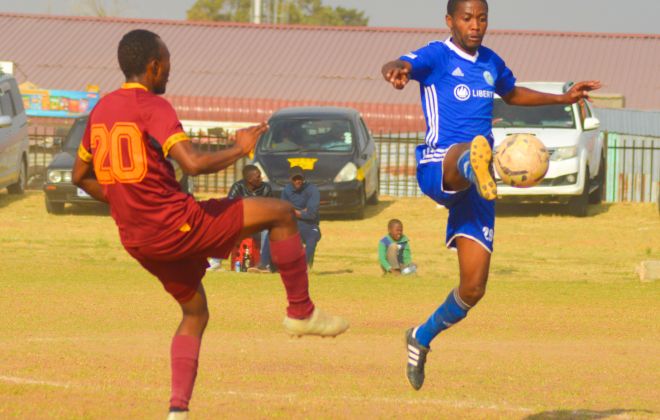 Kick4Life collected a point on the road as they played to a goalless draw with Lioli in the Econet Premier League on Sunday afternoon at TY.

Both teams had to settle for a windy weather and Lioli had that advantage but they could not break Kick4Life’s wall at the back. Lioli’s tough man, Switberth Kum was under a close watch of Innocent Ncala and Johannes Molapo and the latter did well to close him in the 19th minute.

Khubetsoana Kamela portrayed some beautiful skills with the ball in the 24th minute, but his cross was too high for the goals. Teboho Lekhooa nearly scored against his former club, but the skilful midfielder was denied by the woodwork before the half hour mark.

Belson Chana tried his luck from close range but his efforts were well dealt with by Lebohang Nkieane before the break.

Lioli got the first real chance to open the scoring in the second half but Tumelo Makha was brilliantly closed up by Bonang Mohapi in the 49th minute. Just before the hour mark, Coach Katiso Mojakhomo introduced Sanele Phantse in place of Tsiu Moorosi who seemed to have pulled a muscle.

Just like last week, Nkieane was called into action to save the day for Kick4Life as he denied Makha at one on one. Montoeli Sonopo blasted at goals and missed with inches in the 63rd minute.

Paballo Mafeka made a cross into the box and Phantse was unfortunate to miss a touch on it in the 71st minute. When the game was approaching the finish line, the game had to pause for few minutes as Nkieane was on the floor receiving medical assistance.

Nevertheless, both teams had to settle for a point and Mojakhomo said collecting a point on the road is a positive attribute. He said the point will come very handy as the league progresses.