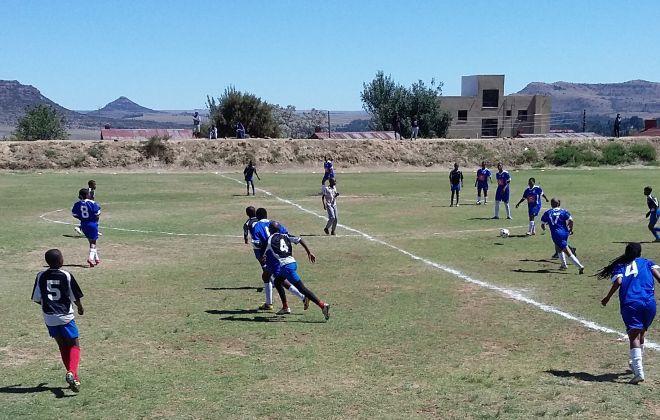 A total of 23 goals were scored in the competition. Two of the participants were the visitors with Mapoteng based outfit, FC Stoko and Khubetsoana’s Basetsana FC. Kick4Life U15 team also took part in the tournament. Senate “Princess” Letsie was the top scorer netting 6 goals.

In the first match, the home ladies clashed with their home counterparts U15 in a match ended 6-3 in favor of the ladies. Although they (Kick4Life ladies) went into the interval 3-1 down to the academy team, things changed in the second half as the ladies went on to score five goals making it 5-3.

In the opening minutes, Kefuoe “Jabu” Makoa stroke from distant but saw her attempt punched away by the keeper conceding a corner kick. The ladies started better of the two teams as on numerous occasions tried keeper Keketso. In the 18th minute the ladies took lead from the penalty spot. Ramontsi brought Jabu down and the referee Paraffin ruled it a foul. Makobo Kepa made no mistake.

However it took the young Kick4Life academy side just four minutes to equalize as in the 22nd minute Teboho also scored from the penalty after Ntobo fouled Moeketsi. Just four minutes later Lloyd Naidoo made it a double to frustrate the ladies. Within thirty five minutes the boys were already leading with three goals as Tumeliso added to the score sheet.

However in the second half the ladies came determined to reclaim their victory and indeed they did so. Letsie was the main architect of the comeback as she scored a brace. Other players who scored from the ladies team were Jabu, Maloro and Ntobo who scored a brilliant header from the corner, as well as Kepa’s first half penalty.

In the second game of the tournament the visitors took on one another with Stoko winning by a goal to zero. The first half did not produce enough sparks as both teams failed to make some excellent shots. However in the 30 minutes time, Stoko nearly punished Basetsana from a count attack but Jamane could not do anything as she was on close watch of two people.

After the half time both teams now looked to be playing under the dressing room instructions. The Mapoteng side were now applying pressure on their opponents. Keeper Mantoa made a crucial clearance by punching the ball after Jamane stroke from the close range. But that was not enough to deny FC Stoko a goal as in the 60th minute, Puseletso handed her side a lead from the cross made into the box and found her unmarked.

A build up by Mpeta and Senkepeng looked to bring Basetsana back into the game after Senkepeng volleyed the ball, realizing that the keeper was off her post but the ball was too high. After the game, Basetsana captain Selloane Nkoebele said they played well considering the fact that they last played when the Super League ended. Another contributing factor towards their lose, she explained, was that they have players from far places and they only meet one match days therefore they struggle to connect well with one another.

The win saw FC Stoko booking their place in the final.

Just after lunch time, Kick4Life U15 played FC Basetsana in the fight for the third and fourth position. The ladies were the first to test the keeper when Dudu shot at goal but her attempt passed the goal mouth. But the young boys contaminated the pressure by knocking the ball around and enjoying possession.

Once again Naido and Teboho were on form as they beat their opponents 4-2. On ten minutes, Neo won the ball against Mpeta and pushed forward until getting into the box and powerfully shot into the net, leaving no chance for the keeper.. After five minutes the home side made it two after Naido crossed the ball and Litlhare cleared it, and it found Atang outside the box who placed it in the net at the far post.

As the boys were enjoying themselves they became relaxed and started committing mistakes. Likotsi made a hospital short back pass to the keeper and Puseletso ran for it and shot at the keeper who cleared and conceded a corner. That did not stop Puseletso from scoring as in the 28th minute she finally did after Mpeta picked her out in the box.

The second half saw three goals scored, two from the boys and one from the ladies within the time frame of fourteen minutes.

In the last match of the day,  Kick4Life won 7-1 over FC Stoko in an exciting final that produced goals from the onset. From a throw in, Jabu attempted to make a cross but went straight to the keeper who was unfortunate to miss it and it was a goal.

Kick4Life kept putting pressure on their rivals and in the 7th minute, Ntobo’s hearder went off the target. Makopo Kepa spotted Senate’s excellent run on the right wing and played the ball behind the defence finding the striker who made it 2-0.

Letsie was giving her opponents the run-around as she managed to beat them only to be disappointed in the final third. On one occasion she hit the post from a pass of Ramphielo. In the 32nd minute Letsie once again found the back of the net after the keeper cleared the ball away and it fell into the place of the Lesotho international who made converted to score again.

The game into the interval with Kick4Life leading 3-0. After the interval, the visitors got their consolation goal through Jamane after contesting for the ball in the six yard box with the keeper who missed it only for Jamane to score on an empty net.

The goal looked to have triggered anger from the host as they went on to score four goals, two from Letsie while Malinga and Makoa shared the remaining two.

Coach Puseletso Mokhosi praised her players for the beautiful game they played throughout the tournament. “We had good chances that I’m happy we took, scoring lots of goals signifies that we have the potential”, she said.