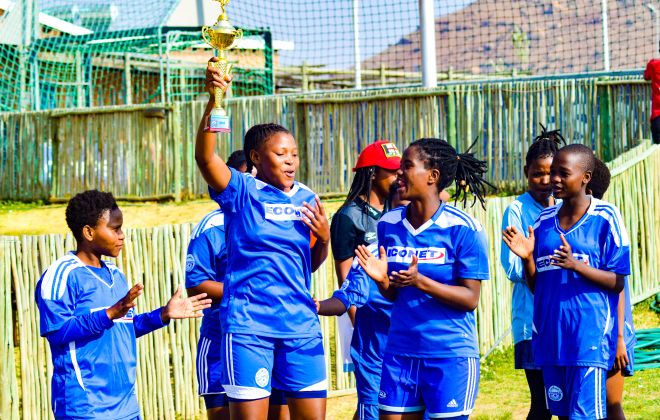 Goals from Morakane Mokhothu, Mats’ukulu Motloheloa, Thato Sentje, Kefuoe Makoa and Nyakallo Taole were enough to give Mafeteng Sistas a whopping infront of their supporters. After not performing to their expectations last season, Kick4Life vowed up their bar into the current season.

It was indeed great to see newly promoted players fitting well in the team and managing to clinch goals in their debuts. Mokhothu and Taole have just been promoted to the senior side, while Motloheloa was enjoying her second spell.

All the goals came in the second half and Head Coach Elizabeth Yelimala was proud of her charges for being patient. She said they were aware of the energy levels of their opponents and they just had to be patient and wait for the moment when Mafeteng loses their focus.

“It was a tough match, we knew they have a great team with lots of young players and we had to stick to our plan. I am happy with the results but it’s too early to get carried away, we still have to keep on working hard,” she said.

Yelimala was also impressed by the performances of the Taole and Mokhothu. She said for them to be able to react positively to the difficult task they were faced with is a sign of maturity and readiness to prosper.