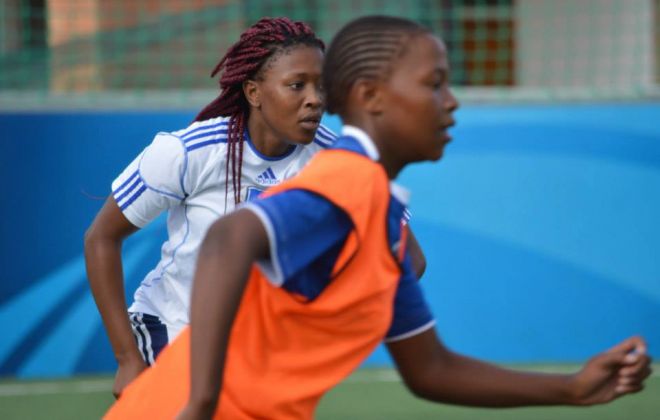 Kick4Life Ladies got their season off to a good start when they beat City Stars 3-1 on the opening weekend of the 2014 Maseru District League season, when they bounced back from going a goal down inside two minutes to secure the win with a brace from Senate Letsie and a second half strike by Mating Monokoane.

City Stars caught the home side by surprise when they opened the scoring with the first attack of the game inside two minutes. A ball through the middle caught out the home sides defence and a City Stars striker ran through to finish with ease.

Kick4Life responded well to going behind and Letsie had two good chances to level the scoring inside ten minutes. On six minutes a great pass by Makobo Kepa found Letsie but she could only fire wide of the goal.  Two minutes later the same pair combined once again and after good work by Kepa to play in Letsie, the City Stars ‘keeper was quick off her line to beat Letsie to the ball.

In the tenth minute it was Letsie’s turn to provide Kepa with an opportunity when she played her in with a nice pass, but Kepa put the ball just wide of the near post. Letsie did level the scores on twelve minutes when she forced a mistake by the visitors defence and scored with ease, before Letsie completed her double to give Kick4Life the lead just two minutes later. Mokhuthu played the Lesotho international in behind the defence and she finished cooly past the stranded ‘keeper.

Just three minutes later, Letsie almost created a third when she won the ball back in midfield before going on a brilliant run down the right, leaving defenders in her wake, before crossing to the centre, where Mokhuthu could only header the ball wide of the far post.

The home side were completely dominating the game, threatening to run riot and Kepa again played a brilliant pass to set Letsie away who lobbed the ‘keeper but the ball went narrowly over the top.

The visitors had a rare chance to level the scores on 21 minutes when the Kick4Life defence were caught ball watching, but the chance went begging when the ball was put over the bar.

Kick4Life made a change at half-time and brought on Puky Pitso for Mokhothu as the home side reverted to two up front and the change almost brought dividends just two minutes in to the second half, when Letsie got on the end of a great pass through the middle and lobbed the oncoming ‘keeper, only to see the ball hit a bump in the pitch with the bounce taking it narrowly over the bar.

Kick4Life finally scored their third goal on 51 minutes. Pitso won a tussle for the ball with the goalkeeper and the ball fell to winger Mating MONOKOANE who finished with ease, cooly slotting the ball in to the far corner.

On 64 minutes the home side came close again, as the chances kept coming. Pitso did well to get the ball in to the box and Ithabeleng Photoane shot just wide.

Pitso found herself with a great opportunity to extend the lead again on 67 minutes as she ran in on goal, behind the defence. Despite being clipped by a defender, she stayed on her feet, and fired her shot against the outside of the far post.

Letsie then also came close a fantastic fourth goal when the ball found her on the left hand side of the penalty box but her attempted shot with the outside of the right foot just cleared the crossbar.

The visitors had a rare sighting of goal in the last minute when Ramohomane was forced to clear the ball off the line, and with that Kick4Life secured an opening day 3-1 victory, a result which could have been far more convincing in the end.

Player of the Match: Makobo Kepa