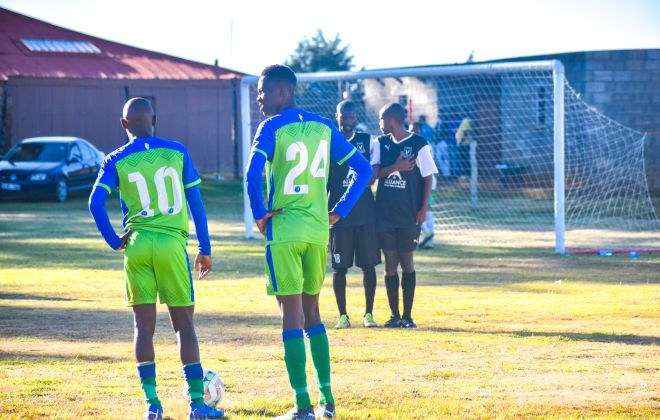 With the Vodacom Premier League season coming to an end this weekend, Kick4Life target 3 points against LCS to wrap their campaign on a high note.

The Old Europa side claimed 3 points on Thursday against Manonyane in Nyokosoba, thanks to Teboho Montlha’s first half penalty.

The win meant that the team is 3 points behind the 6th and 7 placed Lijabatho and Linare respectively. A win on Saturday could possibly place them either in the 6th or 7th place should one between Linare and Lijabatho fail to win their matches.

The morale remains high amongst the players as they eye a positive finish in the league and reclaim their parity against LCS who have always been tough opponents. Midfielder, Mokoteli Mohapi said they are looking forward to Saturday and making the supporters happy.

“We owe it to ourselves, the supporters, the management and the whole Kick4Life family to win this one. We want to wrap it up in style, it’s possible, we are all aware of what we have to do. It is going to be a tough match because they (LCS) are looking to finish in the top4 while we want to be in the top8 so I am anticipating a much tightly contested affair”.

Adding on his teammate’s views, striker Ts’eliso Botsane said the team is in high spirits, everyone is ready to claim bragging rights over fellow Maseru counterparts.

“It’s more like claiming the revenge because we lost to them in the first round, we cannot afford to lose again, in fact, to us, we know we have to win it”.