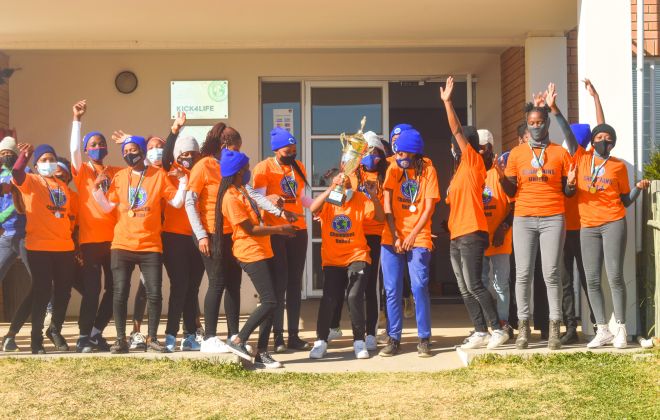 After being crowned champions of Lesotho, a celebration was held on Friday to mark the landmark achievement of Kick4Life Women's team.

The Old Europa outfit saw off their biggest competitors LDF, to a 2-1 victory to clinch the Women's Super League title, branded the Dare to Dream Champions League for 2021, after being Rovers in the semi-final. Senate Letsie scored a brace to inspire the team to end the season on a high note.

Speaking at the event, Director of Football Lepekola Seetane said the woman continue to be trend setters within the Kick4Life family and he is hopeful that they will continue doing well: “I want to congratulate the team for the job well done, you have really worked so hard in the pitch to produce positive results. The technical team which has been working hard planning sessions, motivating you and encouraging you to keep on soldiering,”

The team won all their matches, scoring a total of 39 goals and only conceding 3. Letsie even topped the league’s scoring charts with 13 goals.

Head Coach Elizabeth Yelimala thanked her troops for playing according to the instructions of the technical team and showing unity on and off the field. She said it was not an easy ride as they had to deal with injuries, but whenever a player was called into the team, everyone gave their best: “The dedication, teamwork, togetherness and passion carried us this far, you have been committed to what we put you through. I want to conclude by thanking the management of the organization, the executive committee, the sponsors, our media team and everyone who continues to contribute in the development of our team.”

Kick4Life co-founder Steve Fleming added: "This is a wonderful achievement by the whole team, who continue to push the boundaries for women's sport in Lesotho, as well as challenging gender inequality off the pitch. After coming second in the title race on a number of occasions the squad and technical team have shown great resilience and commitment to keep fighting for the top spot. And now it is theirs. They deserve to celebrate."

Present at the event were the management of Kick4Life, the club’s executive committee and the team’s sponsors, Avani Hotels and Resorts, No.7 Restaurant, Mergence Investment Managers and Liselo Labs.