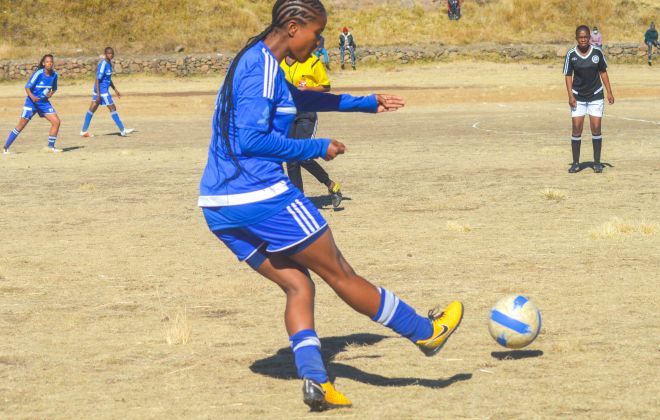 Kick4Life Women rounded their 2021 campaign in the Dare to Dream Champions League with a fantastic 7-1 win over Thaba-Tseka Ladies on Sunday afternoon at Thaba-Tseka.

Morakane Mokhothu and Nteboheleng Mohoshela both struck twice while Liako Makhoana, Mats’ukulu Motloheloa and Thato Sentje all recorded their individual goals. The win meant that the Old Europa women finished top of the table with all victories in their encounters.

Senate Letsie has bagged a total of 11 goals, followed by Mokhothu who has 9. Mohoshela also appears amongst the top scorers with 7 goals. Looking at all matches, Kick4Life found the back of the net 39 times and only conceded twice.

Kick4Life will now proceed to the next round of 4 teams where they are yet to know their next opponent. Looking at the overall performance of the team, Coach Elizabeth Yelimala expressed her satisfaction with the performance her troops showed. She said their intentions were to score goals and work on their defending, which is something they managed well.

“In overall, I am happy with the performance of the team, they did well, they showed hunger and composure. We played against tough opponents who showed that they are here to compete. I am happy we managed to get the goals, while also doing well at the back,” she said.