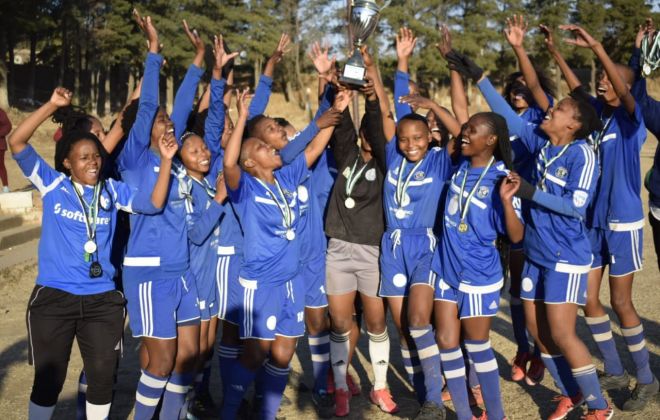 Kick4Life women were crowned winners of the Dare to Dream Champions League after beating rivals, LDF 2-1 at Makoanyane Barracks on Sunday afternoon.

Senate Letsie inspired the Old Europa women to this historic title lifting after scoring a brace. This is the second time the two sides meet in a cup final, and Kick4Life have come out victorious on those two meetings.

Speaking on her good performance, Letsie gave praise to the team for showing solidarity and composure in the tournament. She said facing LDF is always a mammoth task because they have the good side.

“I am humbled, I feel so proud that today we are the winners especially winning it at our most tough competitors. It wasn’t an easy game, we knew they will make it difficult to us but we knew we owe it to ourselves to win this trophy and make our supporters happy”.

Letsie scored early in the first behalf before her lead was cancelled by Kholu Lebakeng just before the break. She however continued her heroics in the second half, scoring her second to give Kick4Life the lead again.

Coach Elizabeth Yelimala also expressed her excitement to the team for their good performance and said the win is a morale boost to the team.

“We had to win this one, it was a must win for us. LDF had been winning league matches against us and we couldn’t allow them to dominate us. I must say I am really happy that, not only did we win against our biggest competitors, but we have managed to win all our matches from the group stages. I want to congratulate the ladies for this success,” she said.

Woman of the match: Senate Letsie