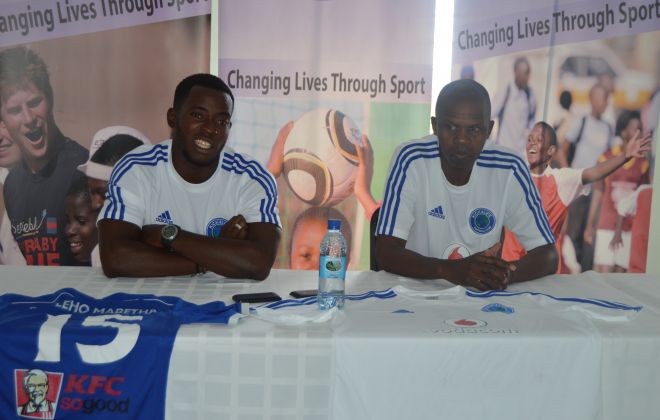 Having picked a point against Linare on Saturday in the Vodacom Premier League, Kick4Life's coach believes his team in still on the right track to make it into the top 8 this season, as per his mandate upon taking the role last year.

The former Lesotho’s national team coach Notsi said this during the media presser on Tuesday afternoon at Kick4Life.

“It was important for us to pick the maximum points but it didn’t happen. However, at the same time looking at our opponents and knowing their potential, I think one would say a draw was a fair result. Linare came to play and we know they enjoy possession and they can also be dangerous at attacking,” he said.

He went on to say he was impressed by his players with how they handled the game especially in attack and to have got into Linare’s box countless times. He said that gives him something to work on because he believes they can still do better.

In the match, both teams controlled the halves with Kick4Life dominating the second half and creating more scoring opportunities especially in the final minutes where Kamohelo Makateng even missed a great opportunity in the 80th minute to hand his team a win. Motlalepula Chabeli also saw his long range shot cleared away by Phasumane Kholuoe.

The defender Mboh Mukete said the good results that are showing off now are of the hard work they do at training. He said they do things as a team and that is making everyone committed into working hard to get the maximum results.

“When the coach first arrived he told us that we are one, and that meant that the team does not only involve the people who are playing but everyone on the bench, the stand and the technical side”.

His combination with Moruti Thamahane has exceptionally improved with the pair looking to understand one another, and the Cameroonian said they have similar characters.

“We are a winning combination, we have the same mind set and we like winning, hence why we always work hard to avoid losing. I’m always comfortable around him because I know he has my back should anything happen,” he said.

Kick4Life are in the seventh position in the log standings with twenty-six points, two points behind Likhopo and Bantu who occupy the fourth and fifth positions. They are visiting LMPS on Sunday and with the pace that LMPS is holding lately, that match is to be a thriller.