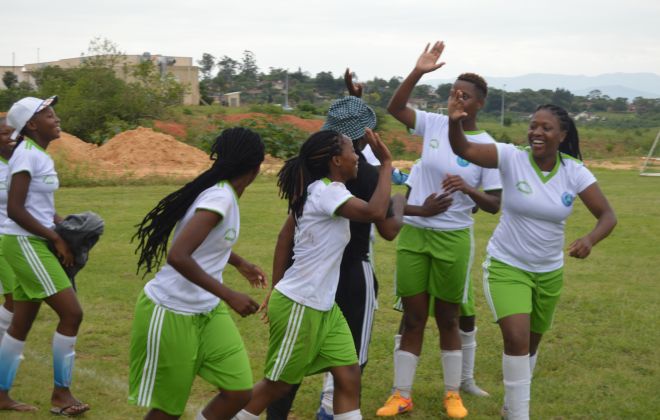 Kick4Life teams returned home with heads held up high on Tuesday morning from International friendlies in Swaziland over the weekend.

Kick4Life Ladies were involved in the four teams’ tournament and came out second of all, with a win, draw and a loss. Senate Letsie was on target, scoring twice while Makobo Kepa also added her name into the score sheets.

The first match was against University of Botswana Kicks (UB Kicks) where Kepa and Letsie’s goals were enough to see the ladies from Lesotho getting a sweet revenge after losing to UB Kicks last year in the same tournament. The other results saw Kick4Life sharing the spoils with Botswana Correctional Services while they also lost 2-0 to Young Buffaloes.

Reflecting from the games, K4L Ladies Team coach Puseletso Mokhosi said she was impressed with how her troops conducted themselves and said it is good for the players to get the international taste.

“For us to be going out to play outside the borders of our country gives us the international exposure and the taste of how other teams do things for better improvement in the game, and I can gladly say we as Kick4Life are getting there” she said.

The U20 on the other hand played two games which they drew and lost one. However, signs of improvement were significantly visible. Trio Alex Motoko, Letsema Ramphielo and Lebone Mohasi scored the three goals as Kick4Life played to a 3-3 all to Mbabane Swallows. In the second game, they went 3-2 down to Young Buffaloes.