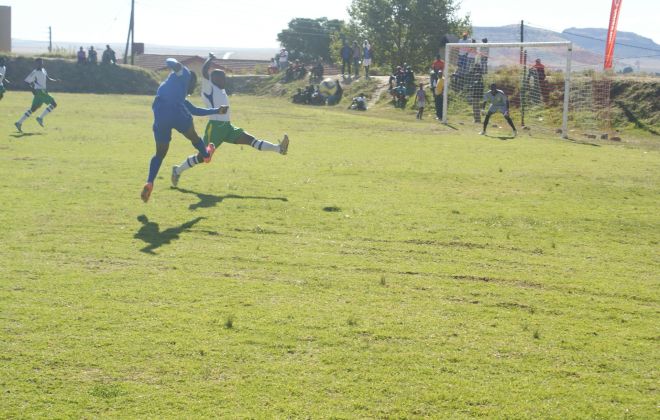 After suffering a shock defeat to Mphatlalatsane last weekend, Kick4Life will be hoping to make a quick come back and reclaim their glory on Saturday when they visit the reigning champions, Lioli.

Kickoff is sat at 15:00hrs at Setsoto Stadium.

Kick4Life remain cautious and wary of complacency in their approach against their formidable opponent.

Defender Thabo Mphosi Feels it’s going to be an exciting match. “It’s going to be a difficult game but we are up for the challenge, we just have to focus on our game and make sure we implement the coach’s plan. They have a very good squad and beating them will not be easy. However if you look at our team, we have the potential to win every game we play. We lost to Mphatlalatsane and we have put it behind us, of course we went there to win the game but we were shocked to see three goals going through our net” he said.

The 17 year old left back went on to say the fact that they are the youngsters makes them a threat in the premier league. “We are still hungry to achieve more and show people what we are capable of and if we are to do that, this game is one of a few that can prove that we are really here. Lioli is a great team but I still maintain that we can compete with any team in the premier league” he concluded.

Having lost to them in the previous season, Kick4Life will be looking for a sweet revenge and take home a Christmas bonus. After ten games, the Maseru based are ninth on the log with eleven points. Should they pick maximum points against Lioli, Kick4Life will have an opportunity of continuing to make their stake in the top 8 and make their presence in the premier league felt.

The past few three weeks have been a bit sloppy for the Teyateyaneng side after losing to their bitter arch rivals Bantu in two occasions, one in the league and one in the cup title. Hoping to regain their momentum, Tse Nala visited LCS where they played to a draw, seeing them dropping to the third position, and Matlama climbing the ladder to top after beating Likhopo.

Their new signing Tumelo Khutlang who has proved to be instrumental to the team will once again fight to show that his move from Sandawana was no mistake to Tse Nala while also, Junior Maba who is still confident from scoring an incredible goal against Matlama and walking away with the man of the match price will complete the attacking force.