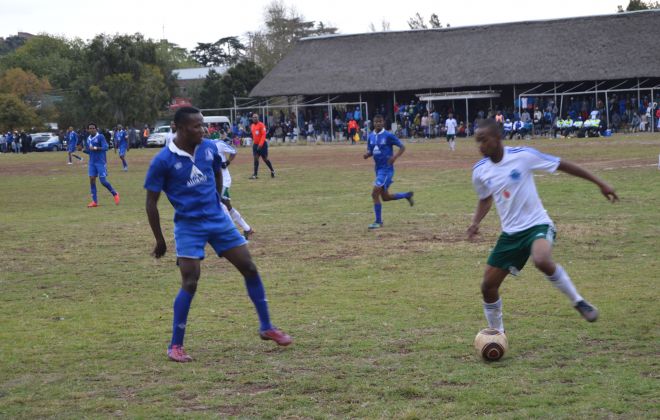 Kick4Life will be looking for a win when they visit Matlama in the Vodacom Premier League on Saturday afternoon at LCS grounds.

Leslie Notsi’s charges are fresh from their 1-0 win over LDF on Saturday which saw them opening a two points gap between them and second placed Lioli. Notsi received a major boost this week, welcoming Vodacom Premier League leading scorer Thabiso Brown who was out for two weeks.

They are currently placed top of the table with eight wins, two loses and a draw. Last season, they were beaten 4-1 by Matlama in the last game of the season, and a win against “Tse Putsoa” could be a sweet revenge for the Old Europa side. On head to heat statistics, Matlama have an upper hand, with two wins out of four meetings, while two matches ended in a stalemate.

Thabo Mphosi who rose from the ranks of Matlama development before joining Kick4Life in the 2015/16 season is yet to prove himself against his former senior team as he could not feature in the previous two games.

Matlama on the other hand are still highly motivated after their 3-0 win against Rovers and will be looking to keep the ball rolling on Saturday. They have endured a poor run of form in the league in the opening stanzas with back to back draws but they seem to be finding their feet lately. Currently placed, they are placed seventh on the log standings, with a game in hand as they are yet to face rivals Bantu.

Matlama were dealt with a blow last Thursday when Coach Moses Maliehe announced his resignation at the club after just a season and half with the Pitso Ground based side. However, good news from their side is that playmaker Tumelo Maine has fully recovered from his injury and he was effectively involved in the team’s 3-0 win last Sunday.

This game could keep Kick4Life at the top of the table should they get the three points, while at the same time, it could bring Matlama back in the title race.