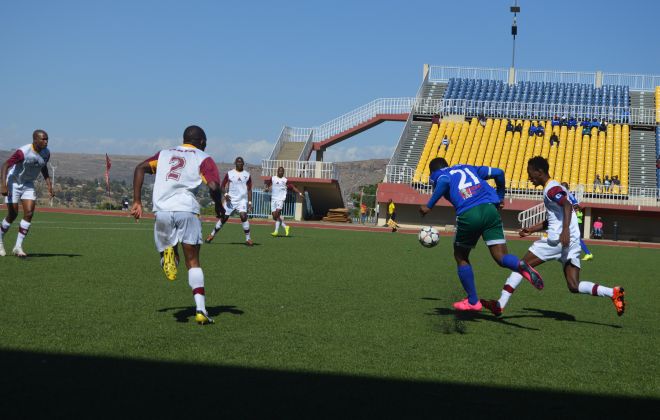 Kick4Life will head to Quthing hoping to bag the full three points in the Vodacom Premier League when they take on Liphakoe on Sunday afternoon.

The match is scheduled to get underway at 16:00hrs

They will be aiming to extend their unbeaten run when they face Liphakoe as they have not tasted any of the defeat in their last four encounters, winning two and drawing two. Their latest result was an impressive 2-0 victory over Rovers last Saturday. Lesli Nots’i’s side are eighth in the standings, they have drawn seven of their 14 matches, won four and lost three.

A win over Liphakoe could see K4L climbing up the ladder to as far as the sixth position should Bantu fail to make it three points against Mphatlalatsane.

The visiting team welcomes their influential striker Motlalepula Chabeli who missed the first game of second round due to an injury.

Looking at the hosts, they are fresh from their impressive 5-2 win against the struggling Mphatlalatsane, moving them slightly out of the danger zone and could not afford to drop any points. They will be hoping to keep the ball rolling when they welcome the Maseru outfit.

The maroon and gold Teele Nts’onyane’s charges were dealt with a blow when their winger Teboho Selo was ruled out for the rest of the season due to a knee injury he picked in a game against Likhopo in the first round.

The Quthing side will also be without the services of their midfield navigator Ts’epo Toloane after receiving the marching orders against Mphatlalatsane, making him the first player to be sent off in this second round. However, they still have the left footed-paced winger Thabo Matso’ele who has been instrumental to the team and even opened the scoring last weekend.

Liphakoe on Thursday announced the singing of former Rovers man Baphuthi Matona together with Motlatsi Nkhabu who was a free agent and they will likely boost them as the team has been struggling with the goals in the first round.

Both teams played to a one all draw in the first round in a match played at Old Europa and with the teams coming into this game after their last weekend victories, this clash promises to be an interesting one and should go down to the wire.