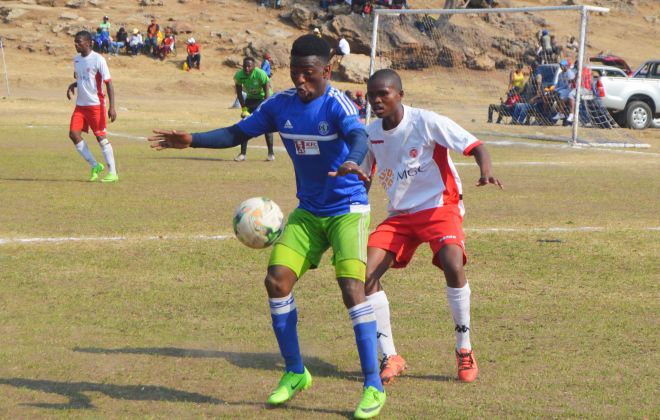 K4L aiming for 3 points against Likhopo

Kick4Life will be aiming to maintain their winning streak in the Econet Premier League when they welcome Likhopo in the Maseru derby on Sunday at LCS grounds.

Kick4Life cruised to perfect start of the second round when they recorded a 2-0 victory against Sky Battalion last Saturday, thanks to Nkoto Masoabi’s first half brace. The derby on Sunday calls for the Old Europa side to keep their momentum.

This was noted by Coach Leslie Notsi in the press conference earlier this week when he said they displayed a good performance against SK and need to build on that.

“Ofcourse it was one of the good performances from the team and that’s what we have been striving for and it’s very important that we are consistent, we have to be consistent in our games” he said.

Notsi also went on to compliment youngster Mokoteli Mohapi who played the full 90 minutes and showed a marvellous performance. Mohapi was therefore named Man of The Match on Saturday.

Kick4Life have done well against Likhopo as they have never lost to them since the 2015/16 season. In the 5 league meetings, they won 4 matches and drew 1.

It will an emotional moment for Bokang Mothoana as he will be playing against his boyhood club for the first time after joining K4L last season. Mothoana was the captain of Likhopo and left them in the 2016/17 season.

New signing Rasetabele Kalosane who joined Likhopo from Lioli last season will also feature against his former teammates. Ralekoti Mokhahlane and Likano teele, who also played for Likhopo, have however, tasted a feel of playing against their childhood team.

Likhopo on the other hand are second from the bottom and are fighting to escape the axe. They played to a 1-1 draw with LDF last week. This week, they announced the signing of 10 players and amongst them is former Kick4Life shot stopper Mokhanya Mokhanya.

They are under the guidance for former Lioli coach Halemakale Mahlaha who has since his arrival at the “Red Army” made Likhopo look more determined. They had just been unfortunate in front of the goals.