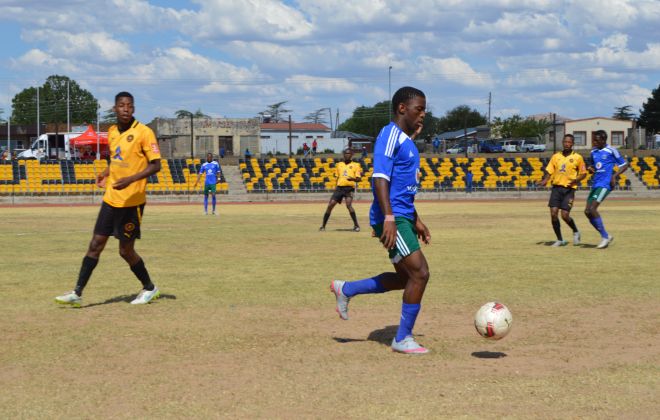 Kick4Life continue their quest to make the top 8 stake on Sunday when they welcome LDF in the Vodacom Premier League at LCS grounds in a double taker.

The first match between Kick4Life and LDF will be played at 13:30hrs while the second tie will see Likhopo battling it out against Lioli at 16:00hrs.

This weekend see the Premier League resume after the international break, and Kick4Life is aiming to extend their unbeaten record to four, and for weeks now pundits have been asking when Kick4Life will slip-up the good form, and the long forecast collapse doesn’t look to happen anytime soon.

The last time Leslie Notsi’s men tasted defeat was in February when they went down 1-0 to Sandawana were made to sweat for victory, and the captain of the ship Moruti Thamahane will be commanding his men to go for full three points against LDF on weekend.

In the first round the two teams played to a stalemate with Morapeli Lesoetsa opening the scoring in the first half before seeing Talasi Morapeli cancelling out his goal late in the second half. This tie, regarded as the battle of the titans, is expected to produce flames as it can be a decisive of whether a team goes up or down the log standings.

Ever since he made his PL debut against Linare in October last year, Mako Makoanyane has being a top performer for the Europa-based team and his good performance didn't go unnoticed as he earned himself the national call ups and with the experience he has been getting, “Six-gun” as they call him, is one of the players who can bring change in this game.

Also Motlalepula Chabeli and Thabiso Brown reunited with the team on Wednesday after being part of the national team that played the AFCON qualifiers with Seychelles, and the pair has been on sensational form, scoring goals for the team.

Changing the focus to the visiting LDF, they will be out to stun the home side and make their presence felt. In their previous three league meetings, they won two and drew one.

With only six games left before the end of the season, they find themselves in the eighth place with twenty-six points, and Coach Motheo “Six-to-six” Mohapi will be expecting his troops to claim victory on Sunday.