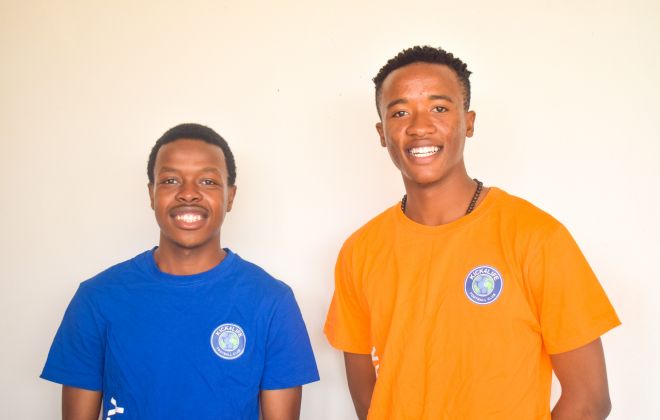 The duo will depart to the United States of America (USA) next week to pursue both their academic and football careers.

These genuinely life-changing opportunities further fulfil Kick4Life's mission to transform the lives of young people in Lesotho through the power of football, with a total of eight Basotho youth now supported to international scholarships. This includes Senate Letsie who became the first women from Lesotho to receive an academic scholarship to the USA in 2018.

Speaking at the club’s media briefing on Thursday morning, Kick4Life’s Country Director Motlatsi Nkhahle and the club’s Chairman Baba Malephane emphasised that the club is committed to contributing to the development of football and society in Lesotho.

Nkhahle said: “One of the things we look into is how the player is conducting themselves, on and off the pitch and this includes their characters, the effort they put into their school work and the performance in the pitch”.

Twenty-year-old Rodger, who will spend 4 years at Freed-Harderman University in Tennessee, studying a Degree in Computer Science, said: ‘’I am very glad I got this opportunity because it shows that it’s possible to pursue both football and academics”.

Ramakatsa, who joined the Kick4Life Academy in 2017, will be studying Liberal Arts and Sciences at Lewis & Clark Community College in Godfrey Illinois for two years. He also thanked Kick4Life for preparing him to become a leader in his community: “I came in as a young boy but today I stand here as an 18-year-old matured player, fully aware of what’s around me. I promise  to work hard and continue raising the flag of Kick4Life and Lesotho."