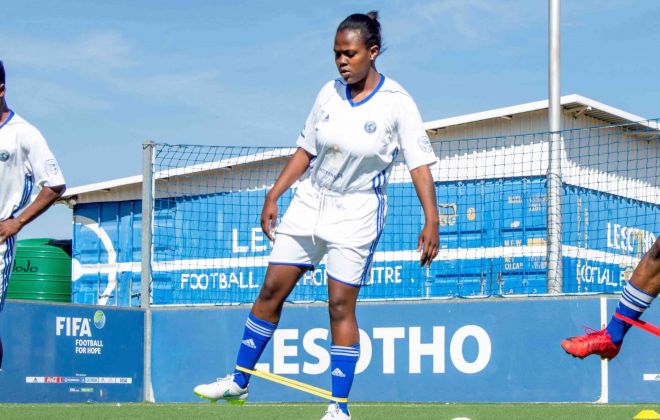 Kick4Life is proud to announce the addition of Boitumelo Rabale to its fold as the second-ever female Mosotho footballer to receive an athletic scholarship to the United States of America.

Boitumelo, known locally as “Queen”, is one of Lesotho’s brightest young female football players. She is one of the latest Academy graduates to be offered a full athletic scholarship to attend school and play football at the collegiate level. Boitumelo will be joining her Mehalalitoe teammate, Senate Letsie, and Morapeli Lesoetsa – two former K4L senior team players and current Academy graduates – in Godfrey, Illinois at Lewis & Clark Community College where she will be concentrating in general studies to attain an Associate Degree.

Boitumelo left her place at the Bloemfontein Celtics in June to represent Lesotho at the AFCON qualifiers and to participate in an intensive Academy internship at the K4L Centre this winter, helping her prepare for the potential opportunity as she worked with K4L staff on her school applications.

During this period, she participated alongside her fellow Academy Graduates – Senate, Morapeli, Mako Makoanyane and Lesia Thetsane – in daily work and training activities, focused on character development, intensive conditioning and technical training and tutoring of the current U15 Academy players.

In reflecting on her internship experiences and K4L participation, Rabale states, “I spent this winter period taking part in the character development sessions where we discussed what makes a complete student-athlete, the importance of balancing football together with academics. It has been really exciting to be part of Kick4Life because here we work as a unit, we are more than just teammates but a family. I am looking forward to doing well in my studies, competing in my football engagements and perhaps making it into the professional league in the US,” she said.  .

In speaking of the new addition to the program, K4L Academy Director, Lepekola Seetane, added, “The Academy staff have seen a lot of growth in Boitumelo’s aspirations to be better not only on the football pitch but in the classroom and in her character; she has immersed herself in our programming and we hope that her work ethic and eagerness to learn translates to further growth and ensures she upholds the values instilled in her during her time at Kick4Life.”

Rabale represents a unique case at Kick4Life and in Academy participation, as generally, student-athletes will rise up from within the Kick4Life systems to access these life-changing opportunities. In reflecting on why Boitumelo is joining Kick4Life’s mission now, K4L Country Director, Hana Taiji, shares:

“Boitumelo will be an important Ambassador for Kick4Life and young women in Lesotho. Her achievements to date in football in Southern Africa illustrate that she has much to contribute to the women’s game in general. We at Kick4Life are excited to support this next stage in her holistic development as she challenges herself to step outside of her comfort zone in every sense and explore her full potential as not only a football player, but a student-athlete and a young leader. Her and Senate’s achievements and contributions at Lewis & Clark are critical for opening further pathways for young females in Lesotho to aspire to new heights as athletes, students and ambitious young achievers in general. For these reasons, we welcome Boitumelo full-heartedly to the Kick4Life Academy family and encourage her to champion the way forward so that more Lesotho “Queens” of football may follow.”

The Kick4Life Academy is our flagship programme, providing vulnerable children & young people with intensive academic support, football coaching and character development, with the aim of supporting them to student-athlete scholarships at international universities and other life-changing opportunities.