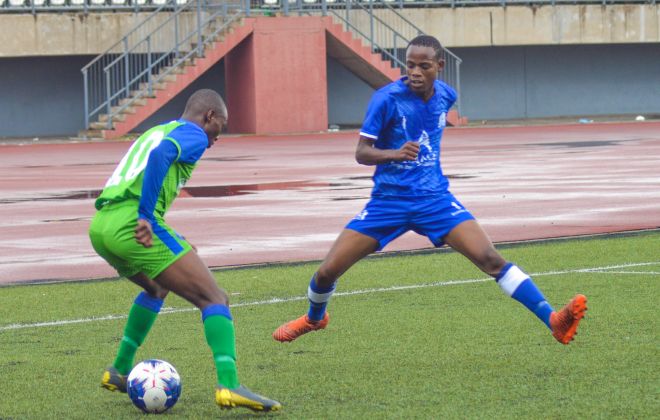 Late Teboho Lillane’s goal denied Kick4Life 3 points over Matlama in the Econet Premier League after Ts’eliso Botsane had given his side the lead in the first half.

Botsane scored a beauty in the 18th minute, beating Monaheng Ramalefane who had come out of his territory. However, Lillane cancelled out his lead with 15 minutes to play.

This was a mouth-watering clash as both sides attacked from one end to another. Matlama got an early setpiece but Phafa Ts’osane was denied by the wall in the 10th minute. Poor touch on the ball nearly got Johannes Molapo punished at the back but he was quick to correct the error.

Botsane came close to scoring in the 17th minute but his brilliant shot went over the top. However, a minute later he was able to score his first goal of the season for Kick4Life. Matlama responded but Matlapeng Ncala stood his ground to keep his side in the lead in the 24th minute. Khubetsoana Kamela produced something rare in the box with his beautiful turn to beat Ramalefane at the far post but his goal was disallowed as the assistant referee flagged him for an offside before the break.

Tsepang Ntsenyane was presented with a chance to double the lead for Kick4Life five minutes after the break but he missed the shot in the box. Coach Katiso Mojakhomo updated his armoury, bringing in Sanele Phantse for Nkopane Tabi at the hour mark.

On the other end, Stephen Essono proved to be a pillar for Matlama, winning aerial balls and marshalling Botsane well. As the game looked like Kick4Life were to walk away with maximum points, Lillane released a cracker in the 75th minute to force the match into a stalemate.

The result put Kick4Life on 13points from 10 matches. They have won 3, drew 4 and lost 3, and have scored and conceded an equal number of 8.

Man Of the Match: Khubetsoana Kamela