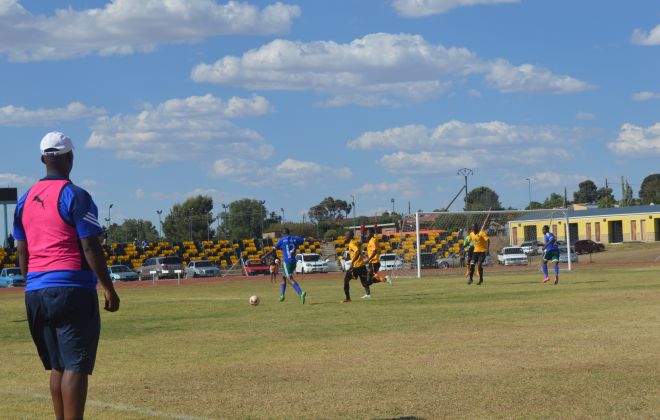 K4L looking for comeback against Bantu

Kick4Life will be looking to return winning ways on Sunday when they welcome Bantu FC in the Vodacom Premier League a LCS grounds.

Kick4Life suffered a 1-0 defeat to champions Lioli last Saturday after conceding a penalty and will be looking to pick up the pieces and get back to winning ways when they lock horns with Bantu.

Kick4Life claimed three points in the first round played in Mafeteng, Marapeli Lesoetsa’s wonder strike taking home a famous win for Old Europa side. After their loss to Lioli, they slipped two places backwards, and they now find themselves in the eighth position after twenty-three games, with 31points.

More sad news is that they will be without the services of Morapeli Lesoetsa and Thabo Masualle will miss the match, due to suspensions. The pair is serving red card suspensions following dismissals in the Likila & Lioli matches respectively. However, former Bantu midfielder Fidele Ntoya-Malonga said his is looking forward to winning over his former team.

“They are a good team, they have quality players and play good football but to us, it’s a must win. We have to win this one and we are confident we can do it. We have the players amongst us who can win every game for us,” he said.

Kick4Life does not have a good winning record when playing at home where from 12 matches they played, they only claimed three points twice, lost three games and drew five.

Bantu will also be without Captain Thapelo Mokhehle and Sepiriti Malefane who also picked red cards in their past game against Linare where they came to a 2-0 down, and forced the match into a draw.

“Amatso Matebele” have not had the best of their season, struggling to find their form which has saw them sitting in the sixth place with 33points. They are currently eyeing for a top4 finish. Out of twenty three league games, they have only won nine matches, lost eight and drew six.

They have amongst their squad Hlompho Kalake who has been vital in commanding the middle of the park, while upfront; their talismanic in figure Lazola Jokojokwane has found himself a habit of scoring.

Bantu have reinforced their squad, bringing in the experienced goalkeeper Essiah Mosala from Matlama in exchange of Hopolang Mohlalefi and the paced midfielder Lebajoa Mosehlenyane from Linare.