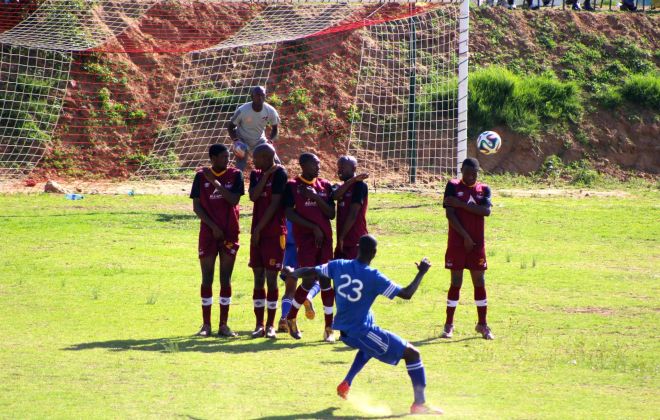 Having sprung something of a surprise to beat LCS at their home ground, Kick4Life will hope to continue with their winning momentum on Sunday when they host Matlama FC in a Maseru derby at the Setsoto Stadium. Old Europa Ground is at 15:00hrs.

Last Saturday threw up the first glamour opening of the season as K4L beat LCS, and the defending champions Lioli crushing Sandawana, while the Mafeteng giants, Bantu suffered a blow when they lost 2-0 to LMPS.

Kick4Life mentor Motlalepula Majoro was happy with his side’s victory and will be hoping to see the combination of Lesotho’s international Thabiso Brown and Morapeli Leoetsa producing goals for the team. Also the team’s winger Motlalepula Chabeli will hope to be at his sensational best against his former club. Chabeli left Matlama in 2014 to join Kick4Life after sustaining an injury that put him on the sidelines for a season long.

Monne Pitso and Cameroonian Robert Mekomba who are nursing their ankle and knee injuries respectively, are still missing from the side. This week, joining them on the sidelines is Mboh Mukete who received a red card in the first game against LCS.

Looking at the visitors, “, Tse Putsoa”, Matlama come into this game after being held to a stalemate by the newly promoted university boys, Roma Rovers. The nine times premier league winners are under the new guidance of Moses Maliehe after the sacking of Ntebele Taole despite taking the team to a credible 4th place.

Maliehe, the former Lioli and Matlama player had previously held the reins of power at Lioli and Sandawana, as well as at national level. He was considered as the best candidate looking at his past achievements and is familiar with the culture of Matlama.

Morale is still high in the Matlama camp after being named the Alliance Winter Challenge winners, beating their bitter rivals Lioli 2-0.

Their star players are  Phafa “Stimulus” Ts’osane and Mabuti Potloane, however Potloane is out of this weekend’s game as he continues his recovery from an injury sustained while playing for the national side.

Last season, Ts’osane was on fine form managing to hit the back of the net 15 times.

This game is likely to attract large number of spectators who are so keen to see how Moses Maliehe stirs things in the Matlama camp, while on the other hand, it will be a matter of interest to see how Kick4Life will hold on giving the big teams a headache. The two had previously played to a 1-1 draw in the 2014/15 premier league.