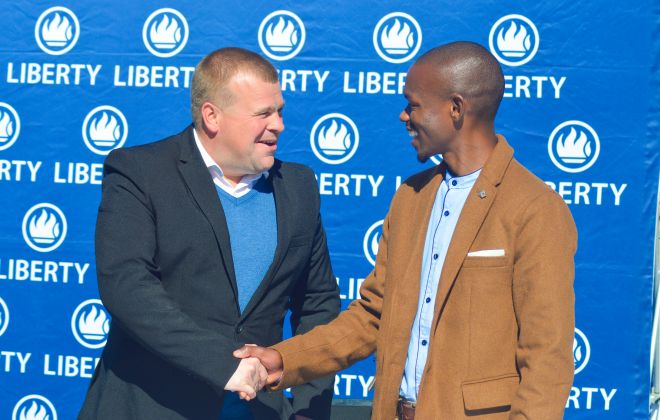 Kick4Life and Liberty Life Lesotho have announced the continuation of their sponsorship deal at  an event at the Kick4Life Centre on Wednesday afternoon.

The deal will see the two working together for the next three years, with financial backing into the teams within Kick4Life as well as the social impact. Liberty first announced their partnership with Kick4Life at the beginning of the 2018/19 Premier League season.

Expressing his note of appreciation, Director of Football Chris Bullock said the club feels honoured to be working with Liberty and the club is looking forward to another exciting 3 years.

“Just 12 months ago we were here announcing our partnership with Liberty Life Lesotho, and today we are here again celebrating another milestone. This time around it’s not just for a season, but for 3 years,” he said.

Bullock further stated that Kick4Life and Liberty are two growing brands in Lesotho with similar vision, and that is to change the livelihoods of vulnerable youth in Lesotho.

Speaking on behalf of Liberty, Rets’elisitsoe Mohanoe said Liberty is committed to helping change the lives of Basotho and they felt Kick4Life is the right institution to work with. He said they will not only be injecting cash but also supporting the club through its social impact initiatives.

“We were fascinated to learn that Kick4Life has so much going on, with programs like character development and youth tutoring, we believe that is the right direction to take in order to empower the upcoming generation. I am proud to announce that we will be helping Kick4Life with cash income of M180 000.00 over the next 3 years,” Mohanoe concluded.