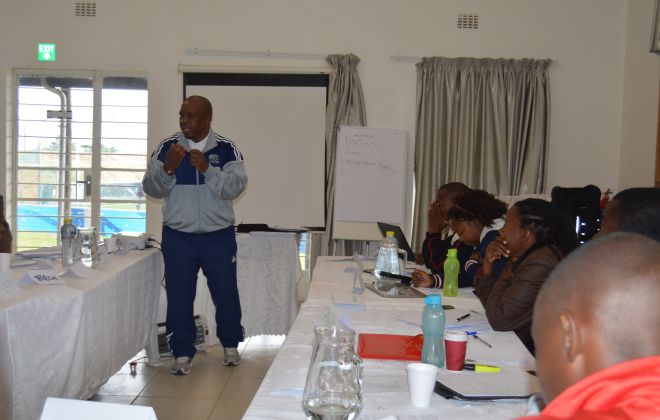 Committed to empowering the youth in sports, Kick4Life with the help of the Lesotho Football Association (LeFA) is holding a week long “Level 1 coaching” for its players and the academy coaches at K4L offices.

The workshop, which started on Monday 04 April, will come to end on Saturday 09 April and personnel from LeFA are doing the sessions for the attendees. The director of football at Kick4Life Chris Bullock said the workshop is meant to equip their development coaches with coaching experience and it’s also an opportunity for some of the players in the team to attend and learn the principles.

According to the Director of Coaches in the National Teams Mr. Seephephe Matete, it is important to start grooming players from early ages so that they grow up understanding the principles and the basics of the game.

“It is important that our teams have their development teams because such kids will grow up being in light with the culture of the team, so when we have workshops like this where we empower coaches working with our developments, it says to you we are sure that those upcoming youngsters will receive a proper training” he said.

Matete went on to compliment Kick4Life for the good job they are doing in establishing the academy and development team, and said they (K4L) are the only team to have held this kind of a workshop. He said not only it helps the players to have the “brain of football”, but it also cuts expenses for the teams to go out and spend money in buying players from other teams when they could have only promoted one or two to their senior team.

Not only members from the Kick4Life family grabbed this opportunity but also Lenkoe Mofelehetsi from Matlama development said he was happy for the opportunity as he learned so much and is still hoping to learn more as it carries on.

“There are things I was never aware of before I attended the sessions, things that when put into practise in the filed they can make one’s job easier” he said.