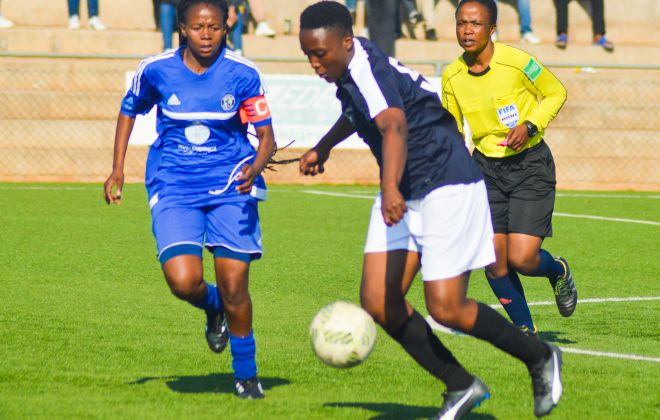 Kick4Life Ladies fell to a 3-0 defeat to LDF Ladies in the Super League Top4 final on Sunday at Maputsoe, at 3pm.

Two goals in the first half by Phuzile Molefi and Lerato Toloane, and one second half header by Kholu Lebakeng saw the Old Europa ladies lose yet again to LDF in this tournament. The first goal came early in the 10th minute, Molefe netting at the tight spot to give her side the lead.

Then Mamello Nkhabe was punished for her tackle in the box as Molefe went down, and Toloane doubled the lead in the 12th minute. Kick4Life quickly regrouped and tried their best to settle in the game. Makobo Kepa blasted at the goals and was denied by the woodwork.

Kefuoe Makoa was substituted before the break, in what looked like stomach cramps, and Mankala Letsepe came on.

Kick4Life then conceded again early, this time in the second half. Kholu Lebakeng headed a rebound. The game ended 3-0, Kick4Life finishing runners up. However, positive news as Kefuoe Makoa was named the Top Scorer of the Tournament, having netted two goals.

Man Of the Match: Liako Makhoana