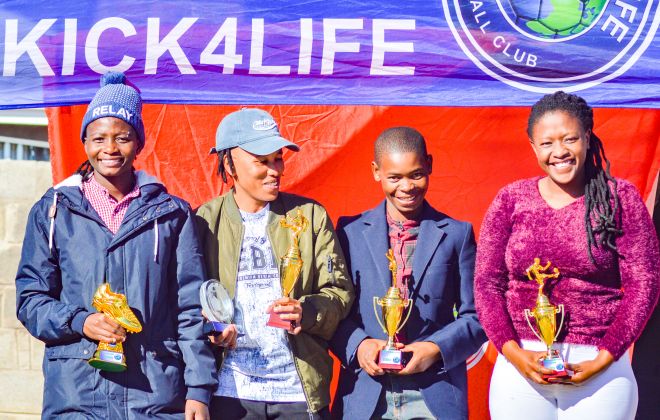 Kick4Life women’s team honoured their players for their contributions to the club, both on and off the pitch at the annual awards ceremony held on Saturday afternoon.

Kick4Life Ladies finished third in the 2018/19 season, the first time the team finished below second place. Coach Puseletso Mokhosi hinted a number of challenges that her team faced: “This past season we had some changes in the team with some players leaving the club for opportunities outside the country. There was nothing we could do than being happy for them,” she said.

She continued by saying despite having a rough season, her troops showed character on and off the field by setting good examples of Kick4Life programs in the communities.

Thato Sentje, popularly known as Cheese clinched two awards, Player of the Season and Players Player and she thanked her coaching team together with her teammates for believing in her. “I feel proud to have been awarded these two achievements, they mean so much to me and I can tell you it’s all through your support,” noted Sentje.

The other winners were Maketleho Pitso who scooped the most consistent award, Bueloa Lepheane who was named the Most Improved Player while Lits’eoane Maloro walked away with the Top Goalscorer.

It is at this ceremony where some players were awarded certificates for being pioneers in the Kick4Life programmatic work. Fresh legs Mamello Nkhabe and Liako Makhoana who joined the club at the start of the season, the long serving Makobo Kepa and Thato Sentje together with the youngster Dennis Raselimo were recognized.