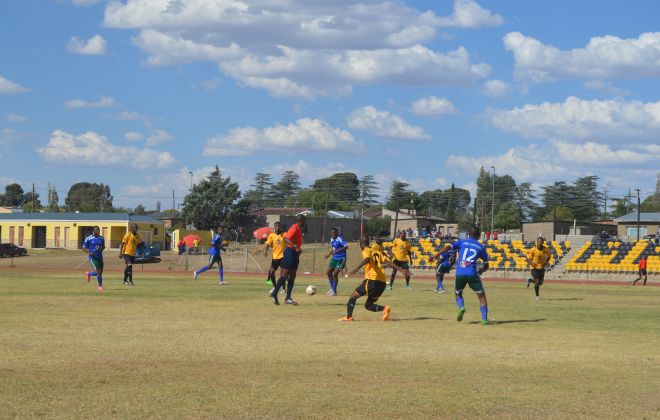 K4L kick off second half with Rovers clash

Kick4Life and Rovers football clubs are set to go toe-to-toe in an exciting Vodacom Premier League battle at Old Europa on Saturday.

This game, that could turn out to be billed as an early battle for the top 8 as both teams make up the final eight top places, and with Rovers lingering just a point off the pace, a win for Kick4Life will open considerate gap and bring them closer to seeing them still securing their stake in the top 8.

That being said, also, a win for Kick4Life could reduce the deficit to a mere point behind LDF and Likhopo depending on the results of how LDF and Likhopo play in their respective ties, and could be the victory that kick-starts their charge.

An added subplot is the early defeat Kick4Life suffered in the hands of the 2015/16 VPL rookies at Machabeng stadium, and beating Rovers could be a sweet revenge to K4L.

January and February are the big months for Kick4Life with the Maseru outfit clashing against  on-form LCS and Sandawana in their upcoming matches, soon after they visit Liphakoe next weekend, but captain Moruti Thamahane is eager for his troops to concentrate on this weekend’s “must-win” game.

“We have to continue playing as a team, keep working as a team and make sure we take our chances,” said Thamahane.

“This is a new game, New Year. We have to focus on our coach’s objectives. We are ready for the game. It wont be an easy game but a tough one. Each and every player wants to play in this game, this is how you are tested. These are the big months for us, but we will take one game at a time, the one is this Saturday, that is where our focus is.”

Rovers, who started the season like a house on fire saw themselves dropping off the pace, resulting in the club falling on the ninth position. However, they visit Kick4Life on a high spirit especially after beating them in their first encounter in the first round, and they would want to use this game as they stepping stone.

They have within their squad, the experienced Ts’eole Ranthimo who has been instrumental to the team since he joined the team at the start of the season. The former Lioli midfielder maestro will be looking to use his dribbling skills to help the university boys claim victory over Kick4Life.

Meanwhile Kick4Life are boosted by the return of midfielder Fidele Ntoya-Malonga who has completed his move back from Bantu and also returning to Kick4Life are goalkeeper Mokhanya Mokhanya, who has been called back from his loan spell at A division outfit Sky Battalion and experienced midfielder Kabelo Salomane. All three should be available to play this weekend.