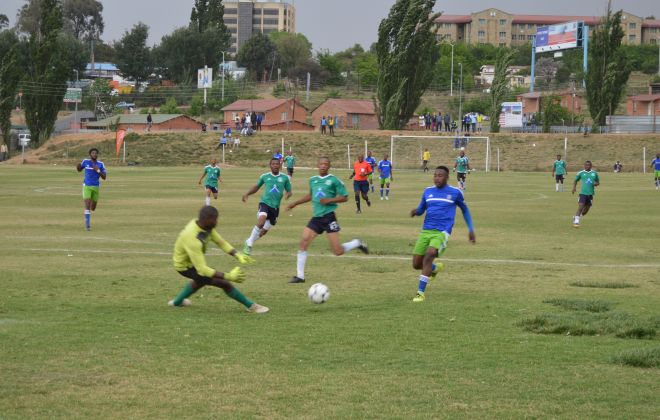 K4L aiming to bounce back against Linare

Kick4Life hope to return to winning ways in the Vodacom Premier League on Saturday when they visit Linare in Maputsoe after suffering a 1-0 defeat to Lioli last weekend.

The Old Europa side claimed the 3-1 win over Linare in the first round, thanks to two goals by Bokang Mothoana and a penalty from Thabiso Brown. The team comes into this game looking for a quick come back after losing to Lioli on Sunday. This was the first loss of the club in 2017 since the start of the second round.

Leslie Notsi’s charges have a challenging task on their hands if they are to beat Linare at their own backyard. Having played for Linare before, the Lesotho’s U20 Khubetsoana Kamela will be eager to knock Linare down and claim three points against his former club.

The two teams have met five times in the premier league since 2014/15 season, with Kick4Life claiming three wins over Linare, while they only lost once. One match ended in a draw.

It has been a magnificent season for the Old Europa side with twelve wins and also occupying to top3 position in the league table. With the league now approaching the finish line, Kick4Life will want to collect as many points as possible so that they could finish on a high note, and facing Linare on Saturday is one of those games they would want to win.

However, they will be up against the highly motivated Linare who seemed to be slowly getting their grip. They are now under the guidance of one respected coach Teele Ntsonyane who looks to have brought great impact in the “Tse Tala” camp.

They clinched a 3-1 win over Butha-Buthe Warriors last week, with former Bantu hitman Nzenze Nkulu hitting the net twice. Nkulu is now the top scorer in the league with 14 goals. They are currently on the eleventh place with seventeen points, and they look to be getting themselves out of the relegation zone.

With all that, Notsi will be looking to return to his winning ways while Ntsonyane wil hope to land another three points.